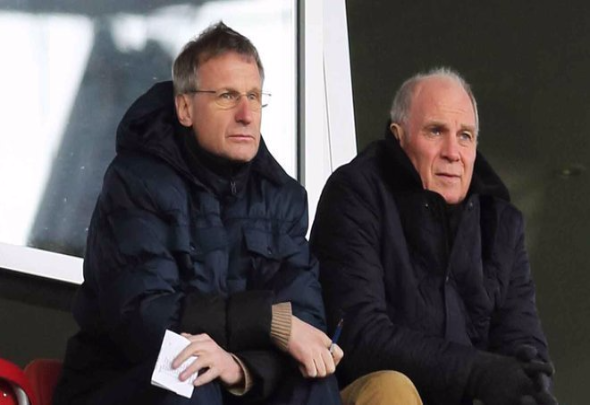 Tottenham will not be making a move for Bayern Munich’s technical director Michael Reschke, according to a report.

News outlet Football.London has claimed that Reschke is not a candidate to replace the outgoing Paul Mitchell following speculation in the German media.

Current head of recruitment Mitchell is serving a notice period at the club after handing in his resignation in the summer.

It is believed that the 35-year-old is looking for a fresh challenge and he was previously linked with the vacant MK Dons managerial job.

He was part of a very successful recruitment team at Southampton before leaving with Mauricio Pochettino to White Hart Lane.

Mitchell has seemingly kept his talent of finding gems and has brought in Dele Alli, Eric Dier and Toby Alderweireld during his time at the club.

But, his resignation has meant that Tottenham will now look to bring in an individual of similar quality to Mitchell.

Reschke also has a impressive CV with success at both Bayer Leverkusen and Bayern Munich, where he was involved in deals for Arturo Vidal, Andre Schurrle, Renato Sanchez and most recently Niklas Sule.

However, the report states that he will not be making the move across to England.

Mitchell will be a huge loss to Pochettino and the Tottenham side in general. It can be argued that Southampton have not recovered from his departure in 2014 as the Saints have struggled with a number of their signings in the last three years, whereas beforehand they all seemed to contribute in one way or another. It is clear that Spurs will now need to go out and flex their muscles in order to obtain someone of Mitchell’s quality. Reschke is certainly an individual who fits into that bracket. However, he has reached the top of German football with Bayern Munich and he may have been reluctant to leave the European giants if Tottenham were interested in him.

In other Tottenham transfer news, Guillem Balague has given an update on Spurs’ pursuit of Spanish playmaker.