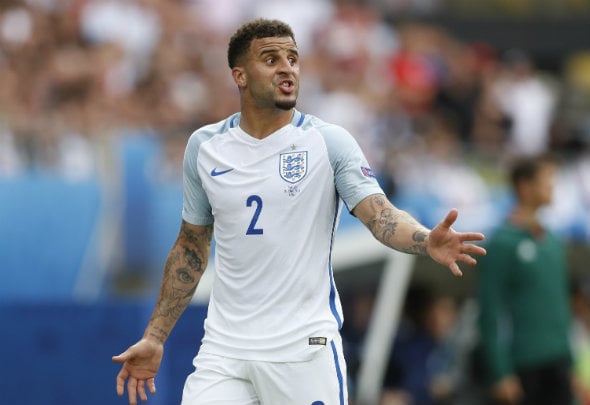 Alan Shearer insists Harry Kane must be dropped from England’s starting line-up, but believes his Tottenham team mate Kyle Walker has been the Three Lions’ best player in Euro 2016.

Kane has struggled to make the impact he would have hoped for in the opening two group games and was hauled off at half-time against Wales after an ineffective first 45 display.

Daniel Sturridge and Jamie Vardy came on to rescue the game and former England striker Shearer believes Kane’s form will cost him his starting place against Slovakia.

“I think Roy Hodgson will start with Jamie Vardy and Daniel Sturridge up front against Slovakia on Monday – he has to,” said Shearer speaking to the BBC.

“This is not the end of Harry Kane’s tournament and he still has a big part to play at Euro 2016 but, after the impact Vardy and Sturridge made off the bench to help England beat Wales, I can’t see him starting our final game in Group B.”

Despite the struggles of one Spurs star, Shearer has been hugely impressed with right-back Walker and has hailed him alongside England captain Wayne Rooney.

Walker picked up man of the match against Wales on Thursday and has been a pivotal figure in defence and attack for England so far.

“Against Wales, Rooney was outstanding again with the way he grabbed the game by the scruff of the neck and was driving everyone forward.

“He and Kyle Walker at right-back have been our best players in France so far.”

England head into their final game against Slovakia top of Group B and a point ahead of Wales and their Monday night opponents.

A win would secure their qualification as group winners and ensure a potentially easier opponent in the knockout stages.

In other Tottenham news, Jamie Carragher has joined Shearer in his assessment of Kane’s tournament so far.