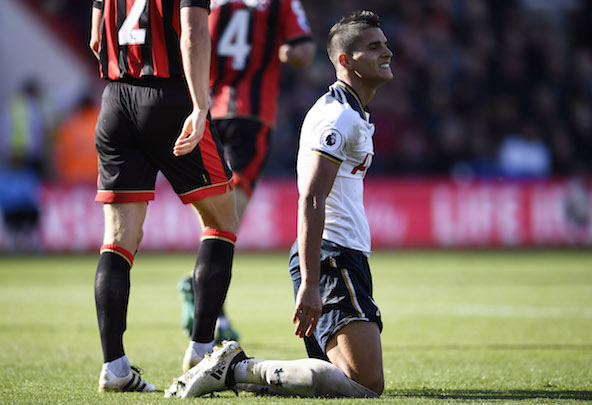 Tottenham manager Mauricio Pochettino has revealed that he hopes to have Erik Lamela on the bench for the club’s League Cup clash against West Ham next week.

The two London clubs will go head-to-head on Wednesday in the round of 16 as they look to secure a place in the quarter finals.

Tottenham saw off a stubborn Barnsley side thanks to a Dele Alli goal, while West Ham cruised past Bolton with a convincing 3-0 win over Bolton at the London Stadium.

Now Spurs could be handed a major boost against the Hammers after boss Pochettino said that he is hopeful that Lamela will be fit enough to make the bench after his long term injury lay off.

The Argentinian attacker has been ruled out for a year thanks to a hip injury, but the 25-year-old has returned to training and could be in line to return sooner rather than later.

Speaking to the press on Friday ahead of the club’s weekend clash with Liverpool, Pochettino was quoted by football.london on their live blog (14:44) as saying: “Erik, we are talking every day. He needs to find that feeling where he can say ‘now yes, I am available again to compete’.

“I hope maybe he can be on the bench against West Ham. It’s about waiting but he’s been doing very well in the last few weeks, with the team in training.

“We only need to wait for that click where he feels ‘yes, I feel I can cope with the competition’.”

Lamela’s last outing came on the 22nd October 2016 in a 0-0 draw with Bournemouth, having made 121 appearances for the club, scoring 19 goals and providing his team mates with 31 assists.

Tottenham’s last clash with West Ham was earlier this season when they secured a 3-2 victory at the London Stadium in the Premier League, although Wednesday’s clash will take place at Wembley.