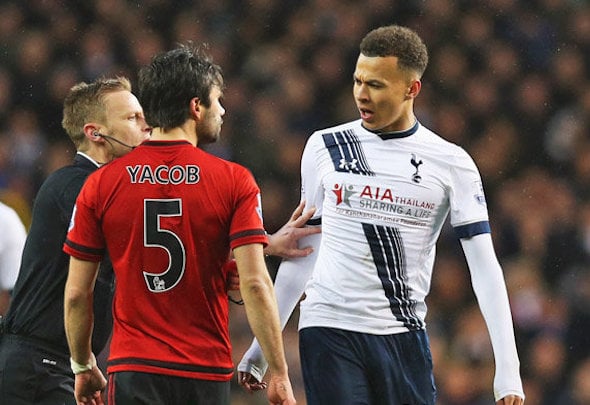 Dele Alli is likely to be slapped with a restrospective three-match ban for punching Claudio Yacob during Tottenham’s 1-1 draw against West Brom on Monday night.

The newly-named PFA Young Player of the Year has been charged with violent conduct by the Football Association for striking Baggies midfielder Yacob in the stomach in the first half of the clash at White Hart Lane.

The action is set to prematurely end Alli’s season if the FA follows precedent and finds him guilty of violent conduct.

This will force Mauricio Pochettino to make an alteration to his team, which has been unchanged for the last three matches against West Brom, Stoke and Manchester United.

Here, Football Insider assesses the options to replace Alli, who has been used predominantly in a playmaker role in recent months.

Nacer Chadli – The most likely option. The Belgian winger has had a stop-start season but comes the closest to providing the considerable goal threat that Alli offers. Has been a second-half substitute in each of Spurs’ last five matches, including as a replacement for Alli in the last two. His return of seven goals this season falls well short of his 13-goal haul of last season, which included a highly impressive 11 in the league. Predominantly used on the left flank by Spurs, which would likely mean Christian Eriksen being switched to the centre.

Heung Min-Son – Has showed flashes of quality in his debut campaign at White Hart Lane, mainly as a wide player cutting in from the flanks to link up with the other attackers. His work-rate and technical quality helped him gain selection ahead of Chadli when Erik Lamela was unavailable for the trip to Liverpool.

Ryan Mason – The most defensive option. The Academy graduate has started only six Premier League matches in an injury-interrupted campaign after being a regular in Pochettino’s first season at the helm. A central midfielder who is better known for stopping the opposition than creating the play, the inclusion of Mason would mean Mousa Dembele being pushed forward into the No10 role.

Tom Carroll – Another Academy graduate, but more creative than Mason. Could slot into the playmaker role, but has yet to prove he can handle the physical attention of Premier League defenders in the way Alli has done this season.