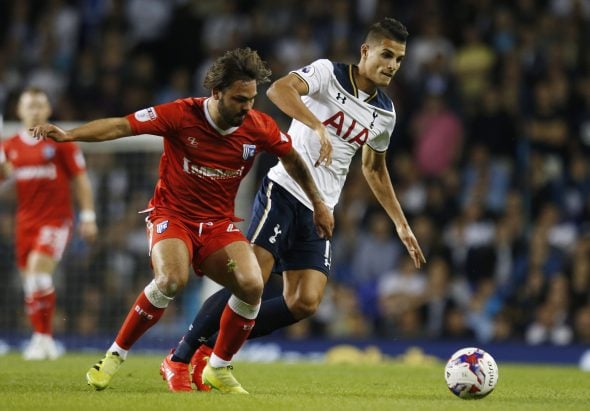 Tottenham are set to omit Erik Lamela for their Champions League showdown against Juventus on Wednesday night as their Italian rivals Inter Milan work on a deal to sign him this summer, according to reports.

The Times claim that Son Heung-Min will be given the nod over Lamela to join Dele Alli and Christian Eriksen in the three attacking midfield slots behind striker Harry Kane for the last-16 second leg clash at Wembley.

This comes after Italian newspaper Tuttosport claim that Serie A big guns Inter are keen to take advantage of the Argentina international’s contract situation as they look to bring in a left-footed wide man in the forthcoming window.

It is said that Inter, who are fifth in the Italian league, have are in preliminary talks with representatives of Lamela, who is a favourite of the club’s sporting director Walter Sabbatini.

ESPN FC claim Lamela currently earns £65,000-a-week at Spurs, which was agreed when he joined from Roma in August 2013 for a then-club record £30million and is due to expire in 2019.

Lamela returned in October after a year on the sidelines in which he underwent double hip surgery and has gradually been re-integrated back into Mauricio Pochettino’s side.

The Argentine was given the nod to start in Tuesday’s 2-2 Champions League thriller against Juventus last month but is now expected to miss out for the second leg.

Lamela has been strongly linked with a return to Italy for much of his five-year spell at Spurs and it would be no surprise if he did leave in the summer. What is likely to be key is how much game time he gets over the next two months. The Argentine has made 21 appearances this season, but most of those have been as a substitute, a role in which he is likely to find himself on Wednesday night. The attacking midfielder’s energy and touch will be missed if he were to leave, although he does not create and score as many goals as his talent suggests he should. Few Spurs fans will quibble if he loses out to Son for the second leg, but it could push a popular player closer to the exit door.