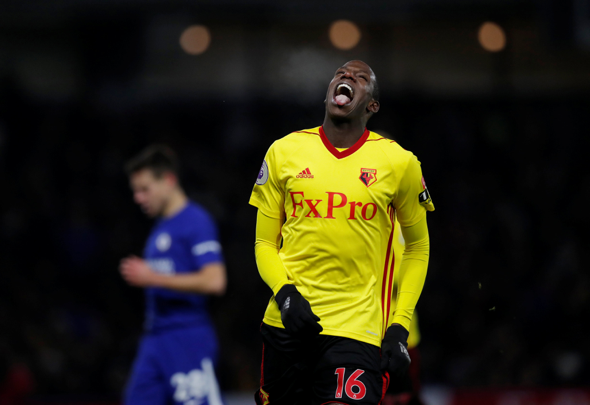 By Richard Parks
Watford midfielder Abdoulaye Doucoure has told French television station Telefoot that Tottenham are among three Premier League clubs that want to sign him this summer.
The former France Under-21 international has had an excellent season for the Hornets under both Marco Silva and new boss Javi Gracia.
He has scored an impressive seven goals from central midfield in 26 Premier League appearances and this has caught the eye of the division’s big guns.
Doucoure was a guest on French media channel Telefoot and asked, “The French media understands clubs like Tottenham, Liverpool and Arsenal are following you – what is the objective?”
The Frenchman replied: “It’s true that these clubs are interested in me. But I am at Watford and my focus is on finishing the season well and to maintain their Premier League status.
“After, when the club and I make the decision to make the next step, then that will have to be agreed but, for now, I am focused on Watford.”
Football Insider verdict:
Aged 25 and with two Premier League campaigns behind him, Doucoure has demonstrated the kind of qualities that make him an attractive target for the clubs with genuine financial muscle. His energy and dynamism from central midfield has caught the eye of Tottenham scouts charged with finding a long-term replacement for Mousa Dembele. The Belgian delivered one of the performances of his career against Juventus last week and is in outstanding form, but Spurs staff have carefully monitored his game time to ensure he does not suffer from the niggling injuries that have pockmarked his time at the club. Doucoure is not at Dembele’s level yet, but he could be if he continues to improve.
In other Tottenham news, it can be exclusively revealed by Football Insider that a flying forward has agreed the terms of an out-of-window contract with the club.
Don’t miss out on breaking and exclusive Tottenham news by clicking here for our brilliant 24/7 updates on Facebook, Instagram and YouTube.