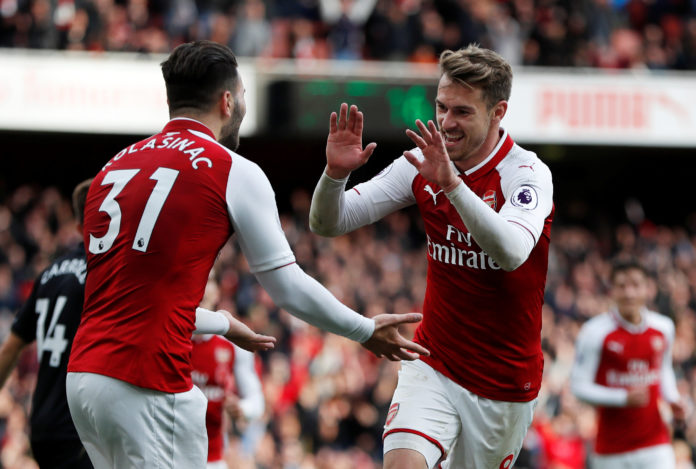 Sky Sports pundit and former Tottenham midfielder Jamie Redknapp has highlighted midfielder Aaron Ramsey as the player who can make a difference for Arsenal in tomorrow’s north London derby.

The Gunners go head-to-head with their bitter rivals in Saturday’s early kick-off at the Emirates Stadium in what is a must-win game for both sides.

Spurs will be looking to continue their recent supremacy for Arsenal having finished above them in the league for the first time in 22 years last season.

However, they have won just once in their 24 Premier League visits to Arsenal and Redknapp warns that Arsenal do have players who can hurt them.

“Aaron Ramsey, in particular, is the player I’d be worried about if I was in the Tottenham dressing room,” Redknapp told Sky Sports.

“With the tactical change they’ve made, moving him further forward, he’s able to make the runs from deep and that really adds to his game.

“He’s got so much energy, he’s a box-to-box player and he’s a threat – as he showed against Manchester City.”

Ramsey has been a key player for Arsene Wenger’s side this season, scoring three times and delivering four assists in his 10 Premier League appearances.

Spurs are flying under Mauricio Pochettino this season while Arsenal have made another slow start under Arsene Wenger, losing four of their first 11 league matches.

Arsenal will be seven points behind their north London rivals with a defeat. Meanwhile, Spurs are eight points behind Premier League leaders Manchester City and cannot afford to drop more points in the title race.

The last three Premier League meetings between Arsenal and Spurs at the Emirates have ended in 1-1 draws.

In other Arsenal news, Sky Sports pundit Paul Merson has made his prediction for the north London derby.