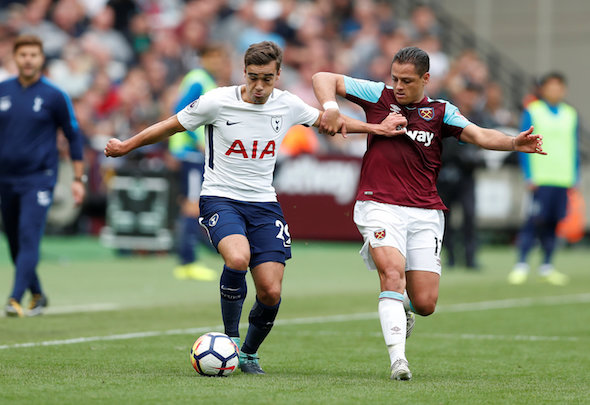 Tottenham midfielder Harry Winks is set to make his senior international debut with the England national team on Sunday afternoon, according to a reliable journalist.

Jack Pitt-Brooke, who is a football journalist for the Independent, revealed on his personal Twitter account that the 21-year-old will start for the Three Lions in their World Cup qualifier against Lithuania.

Told that Jack Butland, Harry Maguire and Harry Winks are all starting for England this afternoon.

The Spurs youngster was officially called for the senior squad for the first time in his career when Fabian Delph and Phil Jones withdrew last week.

The midfielder was an unused substitute as Gareth Southgate’s secured World Cup qualification in midweek with a 1-0 victory over Slovenia at Wembley Stadium.

Winks’ Spurs teammate Harry Kane was the hero on the night, notching up the crucial in stoppage time.

The youngster is inexperienced at international level having only featured twice for the Under-21 team throughout his short career.

Winks missed the chance to participate in the Under-21 European Championships this past summer after suffering a serious ankle during the latter stages of last season.

However, the Englishman has recovered and he has put himself back in contention in becoming a regular for Spurs, already making a total of seven first-team appearances this season.

Winks deserves a lot of credit for the way he has progressed so quickly during his short career. The youngster broke into the Spurs first-team last season and he managed to deliver for the team on a consistent level under the guidance of manager Mauricio Pochettino. It’s encouraging to know that he will be given the chance to represent his country at such a young age and hopefully with the pressure off, he will be able to express himself in the centre of the park. If Winks impresses Southgate in the Lithuania match, he has a great chance of being selected for next year’s World Cup.

In other Tottenham news, this striker has suffered an injury blow before Spurs’ clash with Bournemouth.