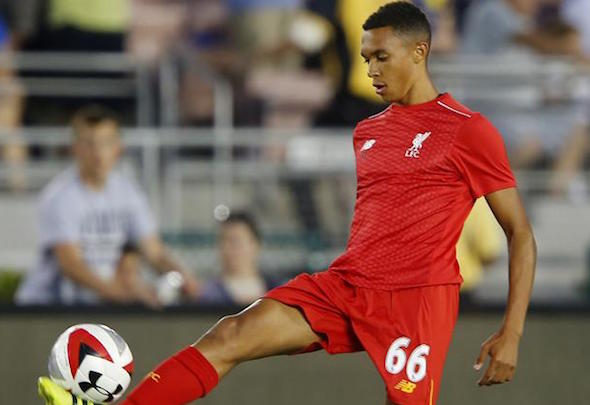 Trent Alexander-Arnold expressed his delight on Twitter after he made his Premier League debut during Liverpool’s 3-0 win against Middlesbrough.

The right-back replaced striker Divock Origi in the dying moments as Jurgen Klopp’s side went back to winning ways.

The Reds had only picked up one point during their last two league fixtures, including losing 4-3 at Bournemouth a fortnight ago.

But they were able to clinch three points at the Riverside when a brace from Adam Lallana, added with Origi’s fine team goal sealed a much-needed win.

Alexander-Arnold has already appeared for the senior side this season, making two successful appearances in the EFL Cup.

He played over an hour during Liverpool’s 2-1 win against Spurs in October, before playing the full match during the 2-0 win against Leeds in November, where he assisted a goal.

Nonetheless, the win for Klopp’s men away from home gives them a much-needed boost in their quest for their maiden Premier League title.

They have leapfrogged Arsenal into second with that win after the Gunners were beaten 2-1 at Everton on Tuesday night.

However, they are now six points behind leaders Chelsea, who are in fine form after they recorded their tenth consecutive league victory against Sunderland

Klopp’s men will now make a short trip to Goodison Park next Monday, when they take on Merseyside rivals Everton.

In other Liverpool news, supporters on Twitter react to Simon Mignolet’s performance against Boro.