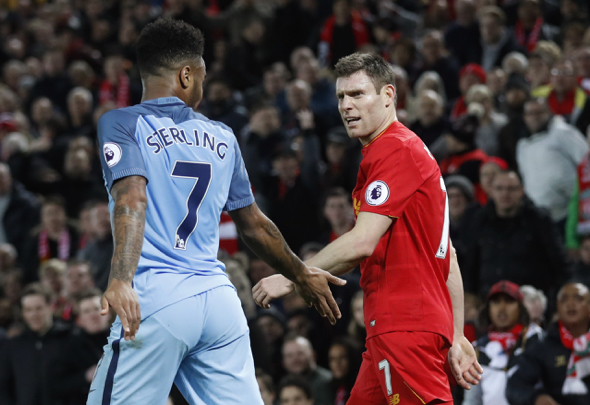 Trevor Sinclair has lauded James Milner following his sparkling performance for Liverpool against former side Manchester City on Sunday.

Milner, 31, started at left-back for Jurgen Klopp’s side and maintained his 100 per cent penalty record this season by scoring his seventh spot kick from seven during the 1-1 draw.

Ex-Man City winger Sinclair claimed on his personal Twitter account that Milner was “top draw” and also praised defender John Stones, as he delivered his verdict on an enthralling game at the Etihad.

Gr8 to see 2 teams going for the win and having a right go. Milner was top draw tbh and really impressed with John Stones's performance too

Liverpool took the lead through the versatile Milner, who stroked home from 12 yards past goalkeeper Claudio Bravo to give Jurgen Klopp’s side the lead in the 51st minute.

However, the Merseyside giants were pegged back in Milner’s second game back at Eastlands after joining Liverpool in the summer of 2015 on a free transfer.

The draw leaves Liverpool in fourth place and one point behind Sunday’s opponents, who have a game in hand over Klopp’s side.

Klopp will be hoping to go one better on April 1 by securing all three points in the second Merseyside derby of the season against Everton at Anfield, which could see Liverpool go third.

In other Liverpool news, Jamie Carragher has claimed this defender was at fault for City’s goal.