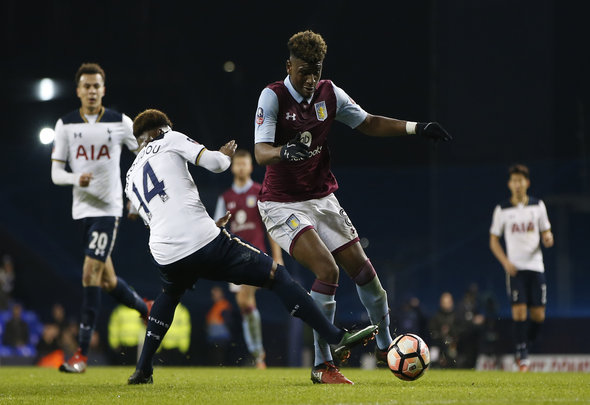 Aston Villa midfielder Aaron Tshibola has opened the door to quitting the club this summer after thriving on loan at Scottish Premiership high flyers Kilmarnock.

Tshibola, 23, joined Steve Clarke’s side in January on loan and has made five appearances for the Scottish club, who will climb to fifth in the top flight if they beat St Johnstone on Wednesday night.

The central midfielder’s career had stagnated in England but has been reignited in Ayrshire and he has revealed he would be interested in extending the agreement if it suits all parties due to the progress he’s making.

Tshibola told the Daily Record: “It’s a joy coming in here. Being in the right environment was key to me and the team is on a high.

“The morale is great in the changing room, the lads are buzzing and to be around a great spirit every day is fantastic for me to try to get to the levels I want.

“The most important thing for myself is to continue my development and the only way that can happen is by me playing first-team games. At the moment I’m doing that and helping the team and we’re doing well. It’s important I don’t stagger that development.

“Obviously you can’t think too far ahead to next season but in the near future the aim is to continue to develop.

“If that means being reunited here in the future and going forward and making the right step we’ll see.”

The Birmingham Mail report that Villa paid £5million for Tshibola when they signed him from Reading in the summer of 2016.

He has a contract with the Midlands giants that runs until June 2020.

The Villa staff will be delighted that Tshibola has rediscovered his mojo after failing to sparkle while on loan at Nottingham Forest in the second half of last season and MK Dons earlier in this campaign. He is playing alongside some experienced and demanding pros at Killie, where Kris Boyd, Youssouf Mulumbu, Gary Dicker and Kirk Broadfoot will all make him aware of the demands of the club. It is difficult to see Tshibola playing much for Villa again, if they fail to secure promotion back to the Premier League. They will happily sell for the right price this summer, although there is zero chance of Kilmarnock paying anywhere near the £5million fee Villa forked out for him two years ago.

In other Aston Villa news, it has been revealed that a Villa striker has cancelled his accommodation and walked out on Championship club.