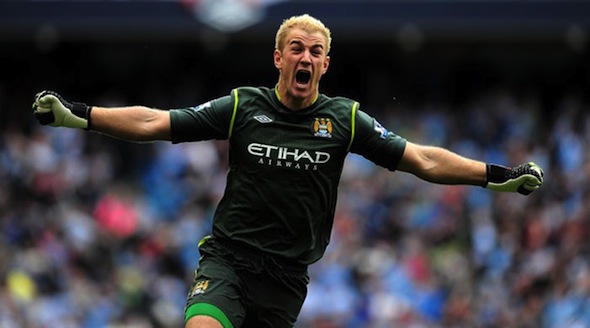 Everton fans have taken to Twitter after manager Ronald Koeman ruled out a move for Manchester City goalkeeper Joe Hart.

The Sun claimed on Sunday that Everton would make their move for the axed goalkeeper after he was told by the Manchester outfit to find a new club.

However, the former Southampton boss revealed to Sky Sports on Thursday afternoon that the Merseyside club have “no interest” in the 29-year-old, despite widespread speculation that he could move to Goodison Park this summer.

Hart may have played his last game for Pep Guardiola’s side, after making his first appearance of the season on Wednesday night against Steaua Bucharest.

Everton fans have expressed their dismay at the news, with many believing Hart would have been a brilliant signing.

Ronald Koeman has no interest in Hart, this is the same Koeman who said there's absolutely no chance of leaving #saintsfc #efc #PinchOfSalt

Heard yer da is asking for a refund in Everton 2 on his goalie top for getting Hart on the back complete with Premier League badges. #EFC

One Everton fan believes that Koeman’s mind may have been changed after new signing Maarten Stekelenburg produced a fine display against Tottenham.

Ronald Koeman says Everton aren't interested in Joe Hart. This might have something to do with these #EFC: https://t.co/uJAYTOq4Xl

The England number one endured a difficult Euro 2016 campaign and made some costly mistakes as the nation were dumped out by minnows Iceland in the last 16.

Hart joined City from Shrewsbury in 2006 and has been a mainstay of the Premier League team during the Abu Dhabi era.

In other Everton transfer news, this midfielder has agreed three-year terms after talks with the Toffees.