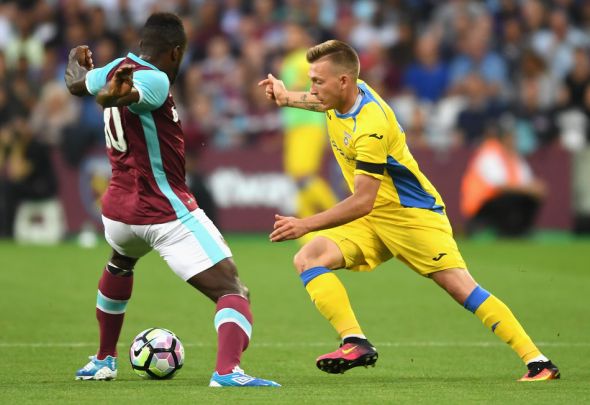 Leeds are interested in signing Slovenia international Matic Crnic after he impressed in the Europa League against West Ham, according to a report.

The 24-year-old scored twice from left-midfield as NK Domzale beat the Hammers in Slovenia, only to be knocked out by Slaven Bilic’s side in the return leg at the Olympic Stadium.

HITC Sport claim that several English clubs are keeping tabs on the former Maribor winger, but Leeds and Reading are ready to make moves to sign Coric.

Croatian outfits Hajduk Split and Rijeka are also said to be interested in the skilful winger, who gave powerful wide man Michail Antonio the runaround in Slovenia.

Coric has scored an impressive 14 goals in 47 appearances for his new side, after signing a three-and-a-half year deal with the Brigands in January 2015.

Domzale’s number 11 made his international debut in May, coming off the bench during a 0-0 draw in a friendly against Sweden.

Leeds have been looking to add width to their side throughout the summer, finishing last term with just Euro 2016 star Stuart Dallas and DR Congo international Jordan Botaka as recognised wingers.

With Spain international Pablo Hernandez expected to play in the number 10 role, Crnic would be a welcome addition to the Yorkshire giants, who face Fulham on Tuesday evening.

In other Leeds transfer news, fans have reacted on Twitter after Liam Bridcutt finally signed for the Elland Road outfit.