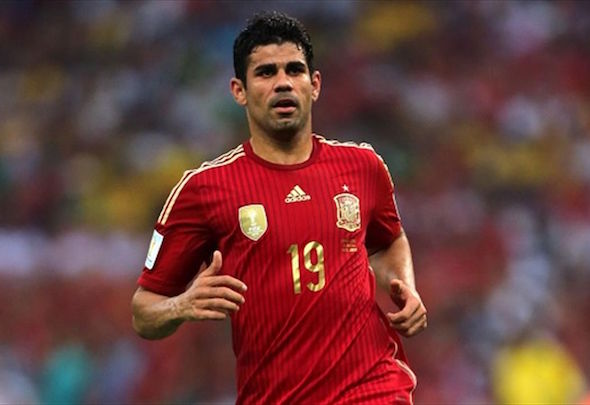 By Chelsea correspondent Tony Hughes
Spain have “not had much luck” with Diego Costa but he is still a key weapon for the national team, according to manager Vicente del Bosque.
The Chelsea striker has scored just one goal in nine international appearances since he qualified to play for his adopted country in 2014.
But Del Bosque regards Costa as one of the three best forwards available to him ahead of Euro 2016 next summer.
“We’ve not had much luck with him but there’s nothing that goes against our style,” explained Del Bosque. “Now we’re choosing between him, Alvaro Morata and Paco Alcácer; in principle those are the three for the future.”
Asked by the Guardian if Costa was the wrong type of forward for Spain’s possession-based style of play, the manager said: “Costa isn’t a problem for us. No. Our midfield is good on the ball, with players whose touch is good, so we need forwards who create space, who move, who commit defenders, occupy them, and Diego does that.
“How can Costa be harmful for us? We have him so he can get in behind, run channels, pull wide.”
Costa, who played two matches for Brazil before qualifying for Spain, is set to be involved in Friday’s glamour friendly against England in Alicante.