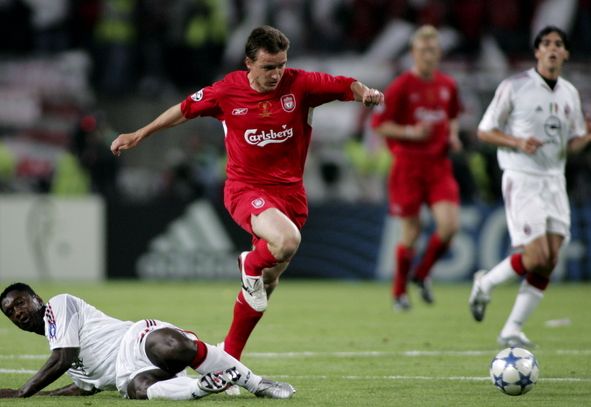 Ex-Liverpool midfielder Vladimir Smicer admits he was left angered to have been denied the chance of an Anfield farewell.

The 43-year-old scored 19 goals for the club from 183 appearances in all competitions during a six-year stint, but his Liverpool career ended with a whimper.

Smicer had been told by then-manager Rafa Benitez at the end of the 2004-05 season that he was set to be released by the club, with the club facing their final Premier League match against Aston Villa.

The Czech star of course wanted to bid a fitting farewell to the Liverpool fans against Villa, but was denied the opportunity after being left out of the matchday squad by Benitez.

Speaking to the Liverpool Echo, Smicer revealed his anger at the decision made by Benitez, even though the Spaniard later handed him an appearance in the Champions League final.

He said: “I wanted to play against Villa so badly. Rafa said that Steven Gerrard and Luis Garcia would be rested. I thought: ‘Great, there will be a place for me.’

“The game was for nothing. We couldn’t move up or down. When he put up the list I wasn’t in the 16-man squad. I couldn’t believe it.

“I was angry that I couldn’t play at least the 10 minutes at Anfield to say goodbye to the fans. I was so unhappy but I didn’t say anything that day. ”

Following the Villa game, Liverpool turned their attention to the Champions League final against AC Milan in Istanbul.

After revealing his disappointment to Benitez at being left out of the side, the Liverpool chief named him among the substitutes to face Milan.

Replacing Harry Kewell just 23 minutes into the tie, Smicer played a pivotal role as Liverpool recorded one of the greatest comeback’s in football history, netting their second goal in the 3-3 draw in normal time.

He also converted his penalty to ensure Liverpool were declared champions of Europe for 2004-05, which in the end, perhaps provided a necessary finale to his Anfield career after all.

In other Liverpool news, Ray Clemence insists the Reds would not be in the top four this season if it weren’t for this player (not Coutinho).