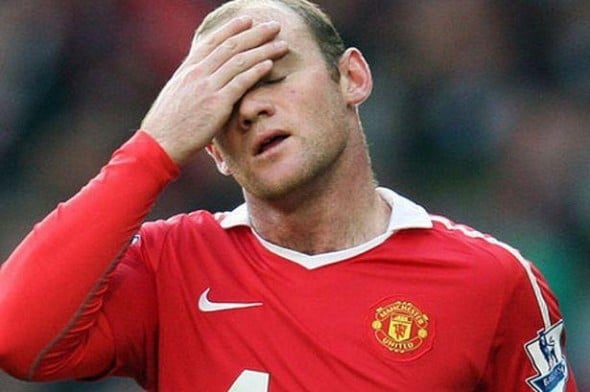 By Coral Barry
Wayne Rooney isn’t good enough to start, Louis van Gaal is not interested in appeasing the masses and other things we learned form Manchester United 2 West Brom 0.
Van Gaal must drop his captain
This was yet another underwhelming display from Rooney. Handed his favourite No10 role today, he was virtually anonymous and it was little surprise that he was hauled off after 81 minutes and replaced by Ander Herrera. One wayward shot in the first half was the highlight of a poor display and the question once again needs asking; how is Rooney still in the starting eleven? Two league goals is a poor return for United’s captain and joint second all-time top scorer.
Individual skill digs out drab United
Jesse Lingard’s beautiful debut goal for the club papered over the cracks of another mundane United display. It has been a breakthrough week for the 22-year-old. He registered an assist in the 1-0 win over CSKA Moscow in midweek and he popped up again today to pounce on a poor defensive header and sweep home a curling shot. It was just United’s third goal in five matches. Van Gaal has some excellent players at his disposal, but, rather than cohesive team displays, United rely almost completely on individuals having one moment of magic to nick a game.

Van Gaal not interested in attack, attack, attack
There are no shortage of ex-United players expressing their disappointment at the lack of adventure from Van Gaal’s United, but the sense is little will change if the team can maintain a title challenge. Now sitting in third with five clean sheets in a row, United might have sent some of their fans to sleep today as they struggled to break down a disciplined West Brom side. But that will not overly bother Van Gaal, whatever statistics he may use to justify the team’s playing style. The great attacking traditions of the Theatre of Dreams is being tarnished by this pedestrian version of United, but it seems they will have to get used to it.
Rojo looking the part
After getting the chance to redeem himself in Luke Shaw’s absence, Marcos Rojo has revitalized his United career. In his four games at left-back he has established himself as United’s best tackler – averaging 4.3 per game before today – and demonstrated that Van Gaal does not need to recruit a replacement for Shaw in January. Strong and calm on the ball, Rojo was as untroubled and in command as he was against the on-fire Kevin De Bruyne in the Manchester derby two weeks ago. United must use Martial’s electric pace
The Frenchman endured a frustrating afternoon, creating just one clearcut chance, but Anthony Martial’s pace is a vital weapon that must be utilised much better. His electric run in the dying minutes of the game was too much for Gareth McAuley to live with and left the defender with no other option but to hack him down for the penalty. It was the first time the 19-year-old was really let loose all game, and that must be partly down to Van Gaal’s stultifying tactics. United have a huge asset. They must utilise it better.