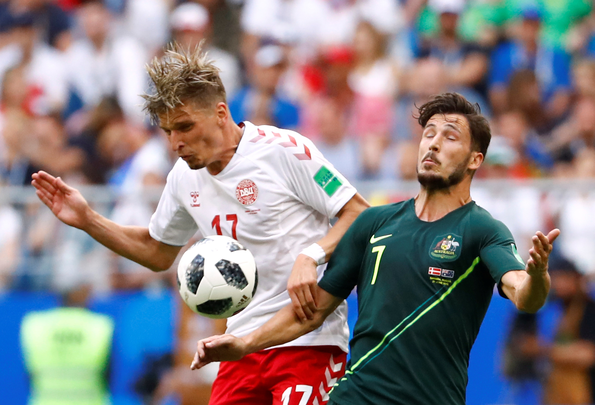 Celtic fans who watched Australia’s 1-1 draw with Denmark in the World cup on Thursday to see Tom Rogic, can’t have failed to be impressed with another player who was arguably the man of the match – Australian right-winger Mathew Leckie.

Rogic was very good on the day but it could be argued that Leckie outshone him on the day, he was perpetual motion on the wing and was unlucky on a number of occasions not to score for his national side.

Leckie is normally a right-winger, which is where he plays for Hertha Berlin, but most of his good work against Denmark was when he cut in to have a shot on goal.

The 27-year-old, who made 29 appearances for the Bundesliga side, scored six goals for his team last season, and he could well be considered as a replacement for the departed Patrick Roberts, if the Hoops are looking for another player for the right-wing area of the pitch.

A lot of scouts watching the game would be very encouraged by what they saw from Leckie, and the Hoops should keep a close eye on his performance for Australia when they take on Peru in their next World Cup game.

If he turns in another good performance, then Brendan Rodgers should be on the phone to his agent and telling him that playing in the Champions League is better than playing for a struggling German side.

In other Celtic news, Brendan Rodgers should use the Hoops’ upcoming pre-season friendlies as an experiment