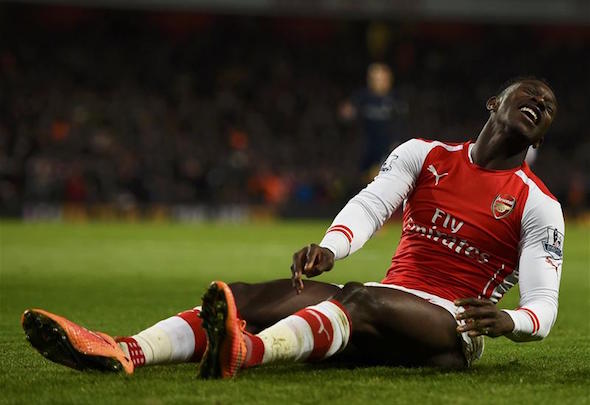 By Editor Wayne Veysey
Danny Welbeck will not be back in the Arsenal first team picture until at least February, Arsene Wenger has confirmed.
As revealed by Football Insider last week, the London club fear Welbeck will be sidelined for at least a few more months and might not even play this season.
The England forward has been out since last April and Wenger has had to continue putting back the date of Welbeck’s recovery in what is said to be causing growing anxiety at the club’s London Colney headquarters.

“Unfortunately he was injured at the end of April and we are now at the end of December and he is still not available because of a bone bruising. That deteriorated and it is a big blow to us,” Wenger said at his media briefing last Thursday. “Especially now we cannot rotate.”

The striker underwent knee surgery in early September but club medics are understood to be concerned that it has not cured what is a cartilage problem.
An Arsenal source has told Football Insider that the player has experienced a fresh setback as he is said to be experiencing pain in his knee when he runs at any speed above a light jog or makes simple actions such as turns.
Privately, there are even fears that Welbeck might not even play in the entire 2015/16 campaign.
Football Insider revealed in early September that the £16million signing from Manchester United had suffered a setback and would be out for months rather than weeks, with four to six months the expected recovery time, after Arsene Wenger had claimed that Welbeck was recovering well from his knee problem suffered last season.
This was confirmed soon afterwards by the club as they delivered an update on Welbeck, which revealed that “Danny is now expected to be out for a period of months”.


The forward’s last game was Arsenal’s goal-less draw against Chelsea on 26 April. He had hoped to return before the end of last season, and then targeted a return in pre-season, but he has suffered multiple set-backs.
The Welbeck injury prognosis could be a factor in Wenger’s January transfer plans as he prepares for a genuine title challenge in the second half of the season.
The manager has said he will be in the market for a new midfielder after losing Francis Coquelin and Santi Cazorla to knee injuries that will keep them both out until at least March, and possibly longer.
He could also make a move for a new striker to provide support for Olivier Giroud and Theo Walcott.