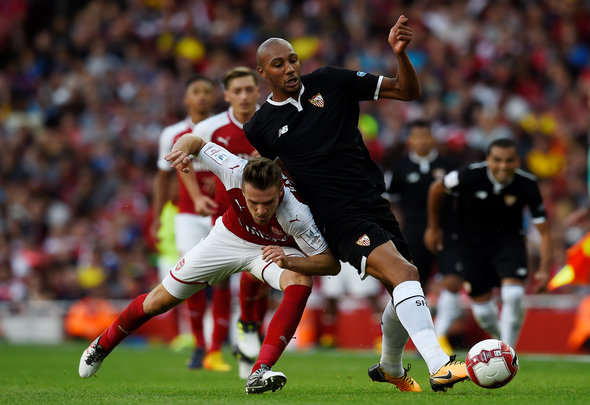 West Ham are eyeing up a swoop for Sevilla midfielder Steven N’Zonzi in January, according to a report.

Sky Sports claims that David Moyes has set his sights on a number of midfield options including Bournemouth’s Harry Arter and Sporting CP’s William Carvalho, who was wanted by the Hammers during the summer.

It is understood that Moyes is focused on strengthening the spine of his team and also wants to snap up a striker and a centre-back during January.

The Daily Mail has reported that Sevilla have given N’Zonzi the green light to leave the La Liga club in January after a falling out with manager Eduardo Berizzo as he has not played a game in over a month.

It is understood that Everton, Arsenal and Juventus are also in the hunt for the France international, who jetted into the UK earlier this week to undergo talks with the two Premier League sides.

West Ham’s form has improved under the charge of Moyes but that should not stop the Scot from improving his squad over January. Two or three quality additions is what the Hammers are in need of and it seems that the spine of the team is something that Moyes wants to strengthen first. N’Zonzi would be a great addition to the side. He has a great deal of experience in the Premier League and top-flight football as a whole and his commanding physical prescience could be exactly what West Ham need in a midfield that looks pretty lightweight at times.

In other West Ham news, James Collins has spoken about the difference between Moyes and Slaven Bilic.