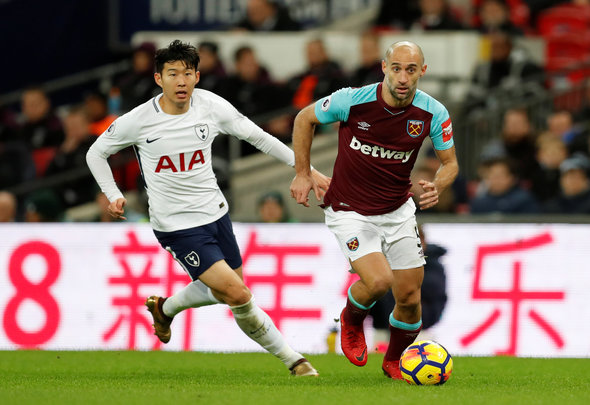 West Ham fans have taken to social media to rave over the display of right back Pablo Zabaleta in the club’s 1-1 draw away at Tottenham on Thursday.
Pedro Obiang’s stunning second half strike from outside the box, which flew past Hugo Lloris into the top corner of the net, opened the scoring after after a first half in which Tottenham dominated but could not find a way through.
Heune-min Son levelled the scores with less than 10 minutes to play with a fierce strike of his own, hitting home from a central position to hit the ball past Adrian and secure a point for the home side.
However, the result could have been so different had it not been for the defensive efforts of the West Ham back line, which included a last ditch challenge from Zabaleta to deny Spurs’ star striker Harry Kane from no more than six yards out.
West Ham fans turned to Twitter to commend the Argentinian for his efforts at the back, after he endured a difficult first half against a threatening Tottenham attack.
Here, Football Insider has rounded up a selection of the supporters’ best tweets:
https://twitter.com/westham_now/status/949028427805396993

Remarkable last ditch defending again by the Hammers. Zabaleta this time with the incredible block on Kane. Alli header over the bar. #TOTWHU

Kane was just offside as he had has golden opportunity saved by Adrian and cleared away by Zabaleta. That was the chance of the match. #PL #TOTWHU

67' What a block by Pablo Zabaleta. Kane looked almost certain to score before the Argentine threw himself in front of the striker. [0-0] #TOTWHU

https://twitter.com/AranNicolWHUFC/status/949028314374602752
The 32-year-old has been a regular for the Hammers since arriving on a free transfer following the end of his contract at Manchester City, missing just one of the club’s 22 league games and starting the remaining 21.
In other West Ham transfer news, the club are readying a £15million swoop for a proven Premier League terrier.