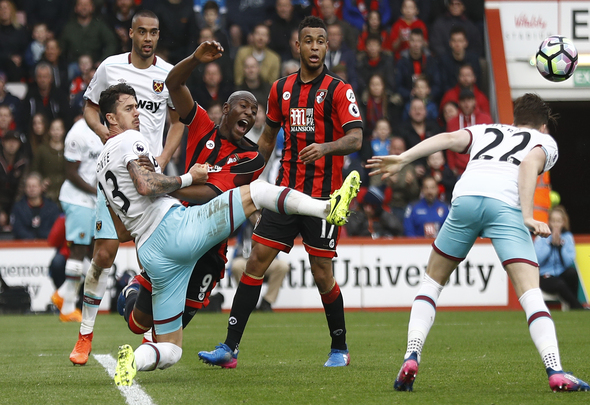 West Ham fans were raging at Jose Fonte for his horrendous performance against Bournemouth on Saturday.

The experienced defender was the key focus of criticism after the Hammers fell to a 3-2 loss to Eddie Howe’s side.

Josh King ran circles around the 33-year-old throughout the game and went on to score a brilliant hat-trick despite blasting a penalty kick wide of the goal in the opening stages.

Fonte conceded the second penalty of the game when he clipped the heels of Marc Pugh in the West Ham box, however luck was on their side against when Benik Afobe then missed a second spot-kick.

Slaven Bilic signed Jose Fonte from Southampton in January and in his first six games for the club he has only been on the winning side on just one occasion when they beat his former side in early February.

The Irons have also failed to keep a clean sheet in any of Fonte’s six appearances and have conceded a less than impressive 15 goals.

West Ham fans are furious with the performance of Fonte and didn’t take long after the match to voice their opinions on social media.

Here is a selection of tweets from supporters about the Portuguese international:

What does Fonte offer that Collins doesn't. How is Feghouli picked ahead of others? Are strikers and right backs a myth?

fegouhli and fonte have been awful, why let oxford go and sit on the bench every week? Play him and let him learn

How are we so poor in defence?? Thought Fonte so going to tighten thins up now make us worst!! #coyi

In other West Ham news, the club are reportedly willing to offer this 24-year-old a new deal in order to end interest from Liverpool.