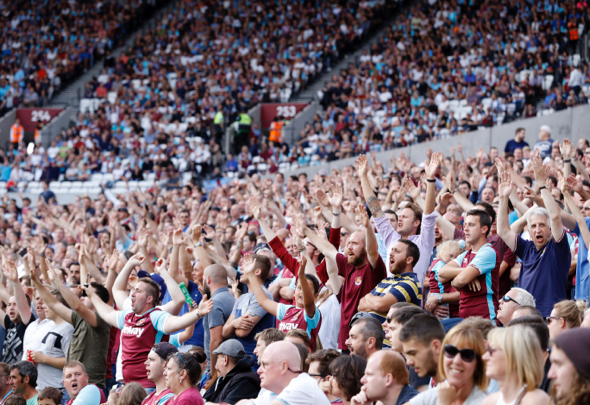 West Ham fans have reacted with mixed views on Twitter to the violence that marred their 2-1 win over Chelsea at the London Stadium on Wednesday night.

Supporters were pictured clashing in the stands as the Hammers recorded a famous win over their London rivals in the EFL Cup.

The result on the pitch meant that Slaven Bilic’s side progressed through to the quarter-final stage of the competition, where they will meet Manchester United at Old Trafford.

However, some fans felt that a minority of West Ham and Chelsea supporters will make the headlines for the wrong reasons.

But others were of the opinion that the media should not talk about the minority off the pitch, instead they should focus on the fantastic performance by the Irons against their local rivals.

Additionally, one supporter called for owner David Gold to segregate the home fans from the away supporters to stop the violence.

The Irons, who moved into the London Stadium this season, have had trouble settling down to their new surroundings, with numerous problems on and off the pitch.

A fantastic win for my beloved #WestHam last night, totally overshadowed in the media this morning by the mindless actions of a few… #COYI

Because with two minutes to go it was an impeccable atmosphere. Chelsea fans ruin it and it's West Ham fans' fault. #COYI

I was there, both fans were shameful #COYI

Stop talking about the handbags everyone it's West Ham v Chelsea, it was a cracking performance from the lads #COYI

Barriers could easily be set up to stop the violence! @davidgold spend the money mate #WHUFC #COYI

A good result for West Ham tonight – unfortunately all the discussion will be about the thugs not the football. #COYI

In other West Ham news, left-back Aaron Creswell has sent this message to fans on Twitter following the 2-1 win over Chelsea.