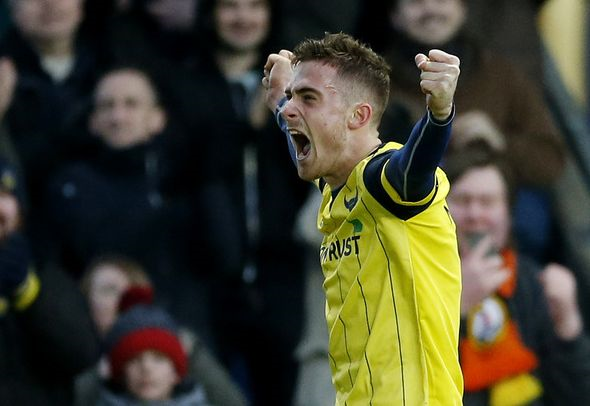 Toni Martinez scored a debut goal as Oxford recorded a superb 3-0 victory over Newcastle in the FA Cup fourth round on Saturday.

The 19-year-old striker, currently on loan from West Ham, began the game as a substitute, but was handed an opportunity to impress by manager Michael Appleton with 20 minutes left on the clock.

He did just that, storming onto the scene at the Kassam Stadium with a goal that capped-off a memorable day for the League One side.

Martinez’s debut display delighted the Oxford fans, who couldn’t wait to see their new signing in action, but his performance also drew praise from West Ham supporters on social media.

As i mentioned times before, I would have kept Martinez. Much better option than Calleri and Fletcher on the bench IMO #whufc

#whufc hats off to Toni Martinez 1st professional goal.. 1st of many for the hammers in the future!! 👏🏻👏🏻👏🏻

Toni Martinez scores within minutes of coming on for his debut. Recall him Slaven!! #whufc

Always said Martinez is a baller ⚒

Toni Martinez knows where the back of the net is. Natural goalscorer

Get in Martinez scoring against Newcastle on debut #whufc

Martinez joined West Ham from Valencia in April last year, but failed to break into the first-team squad.

His form for the development side, however, caught the eye of manager Slaven Bilic, who invited him to train with the first-team squad.

He has now scored 13 goals from 13 appearances in all competitions this season.

However, instead of granting him an opportunity in the first-team at the Olympic Stadium, Bilic instead allowed him to join Oxford on loan until the end of the season.