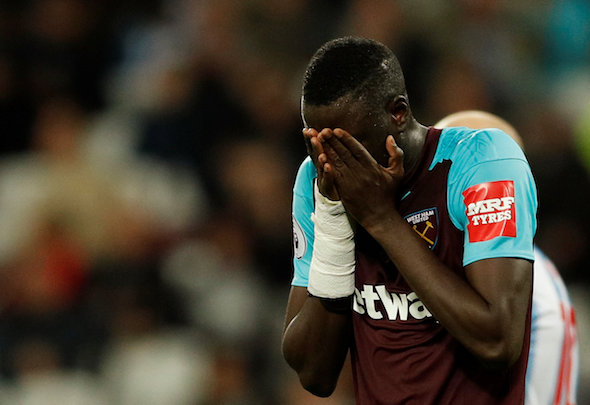 West Ham fans are not singing the praises of 28-year-old midfielder Cheikhou Kouyate after a reported sickness update was delivered on the player.

Sam Inkersole, a journalist for Football.London, Tweeted that the Hammers were “hopeful” the midfielder would be fit to face Southampton when the Premier League returns to action this weekend, despite missing Senegal’s international fixture against Uzbekistan.

Cheikhou Kouyate missed Senegal’s friendly against Uzbekistan through illness on Friday. West Ham hopeful he’ll be fine for the weekend vs Southampton.

Kouyate has scored three goals in 35 outings for the Irons from the centre of the park, but it’s the lack of effort that the former Anderlecht man shows, the fans wanted to remark on.

There was one supporter who hoped the board would ship the Senegal international out of the club this summer, while another accused the 28-year-old of “stealing” a career as a professional footballer.

It was clear from the West Ham faithful’s responses that Kouyate’s reported return to fitness was not one that would be rejoiced.

Tensions are up in the air ahead of Saturday’s visit of the Saints to the London Stadium, in light of the pitch invasions that disturbed the club’s defeat against Burnley.

The Hammers must win this battle at the bottom of the table as defeat will see them drop into the relegation zone.

Here is a selection of Twitter reactions to the player being reportedly ready for the weekend:

I think most of the fan base are hopeful he isn't fit for Southampton. He barely puts a full shift in when he is well, hate to see what he is like at 70% fit

Let’s not be hopeful. Let’s give Cullen a chance

One of the many players stealing a living as a pro footballer for us this season tbh. I really fear for us on Saturday if he’s in the starting 11. ⚒

Hopefully he’s not fit Sam. He’s been AWOL most of the season. He’s in decline.

I hope his ill for the rest of the season! Absolutely terrible lazy player…

Hope we can shift the bloke in the summer

In other West Ham news, fan favourite ‘devastated’ as Moyes prepares to wield the axe.