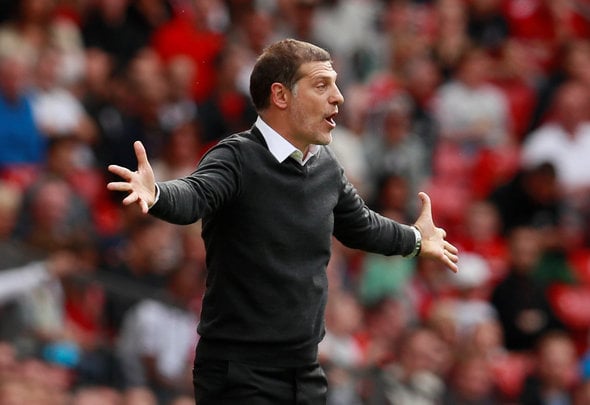 West Ham have identified Napoli manager Maurizio Sarri as the man they want to replace Slaven Bilic, according to a report.

The Express claim that the current Hammers boss survived crisis talks a couple of weeks ago, but that his time with the club is running out.

The Croatian’s contract at the London Stadium expires at the end of the season and he is expected to leave after blasting the chairman for their transfer business.

It is understood that West Ham have lined up current Napoli boss Sarri as Bilic’s successor, with the former a highly-rated coach.

The report details that the 58-year-old still has two years left on his deal with the Serie A club, but that West Ham could meet his £7.5million buyout clause to bring him to the Premier League as it’s within their price range.

Sarri is recognised as being a brilliant tactician and has managed several teams in his homeland Italy.

He has helped Napoli to second and third placed finishes in Serie A to help enhance his growing reputation.

Bilic has been a popular figure during his time as West Ham manager, but a lot of fans are now beginning to turn on him and feel it’s time he left. The Hammers are now hoping to push on and compete for the European spots following their move to the London Stadium. However, they looked a long way short last season and have started dreadfully in the new campaign. They have lost their first three consecutive league games and conceded 10 goals in the process. A move for Napoli boss Sarri could be a very smart move as he is more accustomed to working at a big club. Italian boss Sarri is known to be a brilliant tactical and there is certainly a lot of potential in the Hammers squad to rise up the league table.

In other West Ham transfer news, they are preparing to offer their attacker a new contract to fend off interest from rivals.