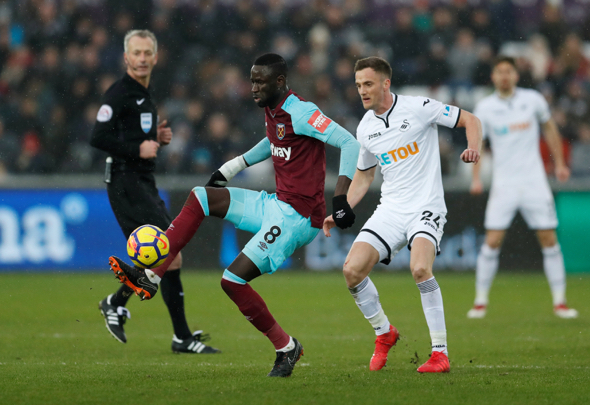 Cheikhou Kouyate must improve in the eight remaining Premier League fixtures or face being shipped out of East London this summer.

Supporters are increasingly frustrated with the Senegal international who has been accused of laziness and of “stealing a career” by sections of fans who would like to see the defensive midfielder exit the club.

However, after having only signed an improved deal to remain at the London Stadium until 2021 back in 2016, the former Anderlecht defensive midfielder could be around for some time yet.

Back in January, Kouyate’s agent Saffet Balkan revealed to a Turkish media outlet that there had been interest in his client from the Premier League and Italy.

And if this is true then the Hammers board should snap up any offer for the 28-year-old whose popularity in the capital is at an all-time low.

In terms of offering any defensive stability in the centre of the park, the former Anderlecht star has given very little throughout a campaign which has been a sham for so many reasons, not least due to the issues on the field of play.

With rumours also surrounding the future of David Moyes after Manuel Pellegrini was reportedly lined up as a replacement, the Hammers should make it a double exit with Kouyate handed his marching orders too.

In other West Ham news, Hammers must wield axe without mercy as they reportedly make title-winner a target.