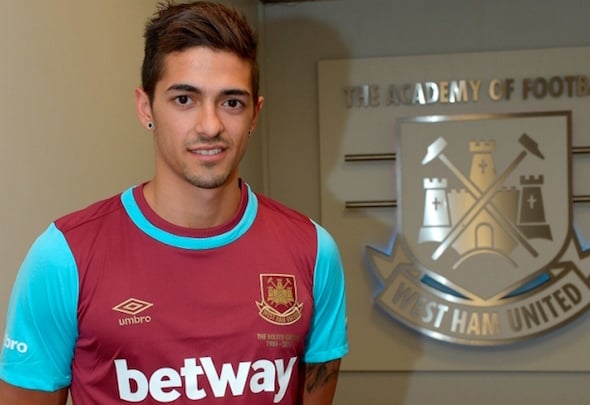 Football Insider rates the West Ham players out of 10 after their 1-1 draw against Watford at Vicarage Road on Saturday evening.

Darren Randolph 6 – Other then picking the ball out of the back of the net following Troy Deeney’s penalty, Randolph had little to do for the Hammers.

Cheikhou Kouyate 5 – Despite playing out of position, Kouyate looked calm other than one moment of madness in the third minute as he gave away the match-winning penalty, scored by Troy Deeney.

Jose Fonte 7 – Continued to hit the ground running in claret and blue with a strong performance at the back for the east London outfit. Highlight of the match came in the second half with an inch-perfect tackle on Isaac Success stopping a Watford break.

Winston Reid 7 – Remained solid throughout the match against Deeney, with the Hammers matching Watford only for a penalty to be the difference. Has played an integral part in solidifying the defence.

Aaron Cresswell 7 – Shown again why he should be given an England call up, as he proved solid in defence and dangerous in attack. Michail Antonio should have scored from his cross in the second half.

Mark Noble 7 –  A typical performance from the Hammers captain, did his job without setting proceedings alight. Tracked his runners, completed a strong percentage of his passes and kept his boyhood club ticking.

Pedro Obiang 6 – Hard-working performance from the midfielder once again,

Sofiane Feghouli 7 – Seems to have finally settled in claret and blue, as he orchestrated much of the Hammers’ attacking efforts from the right flank. Supplied a number of wonderful crosses.

Manuel Lanzini 6 – Spurned a number of set-pieces, with the majority of his corners failing to beat the first man while a free-kick was blasted over from a crossing position. However, improved in second half by creating the equaliser.

Robert Snodgrass 7 – One of West Ham’s only players to show any kind of craft against Watford. Forward runs, trickery and an impressive range of shooting without finding an end product.

Michail Antonio 4 – Had little impact in the centre-forward role, as Miguel Britos and Younes Kaboul marshalled the former Nottingham Forest attacker well. The 26-year-old missed a sitter in the second half after a wonderful ball in from Cresswell, before being sent off for a needless handball.

In other West Ham news, Robert Snodgrass has given this verdict on reported interest from a huge European club.