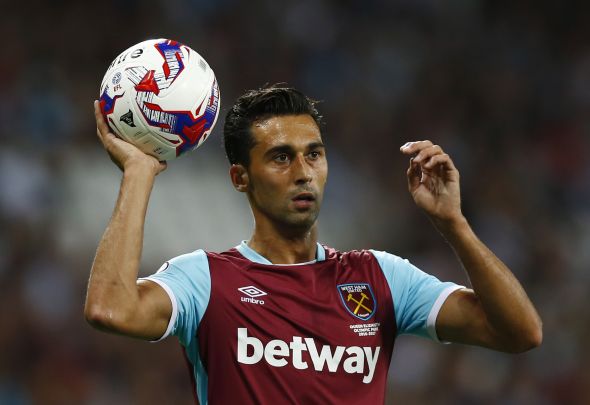 Alvaro Arbeloa will leave West Ham at the end of the season, according to a report.

Hammers site West Ham Way claim the 58-times Spain international is surplus to requirements after his move to the club failed to work out.

It is said Arbeloa, 34, is out of contract in the summer and he will not be offered an extension by the London club.

West Ham Way, which is written by the self-styled ‘Ex-WHU employee’ and has a reputation as a reliable source of information about the club, report that the club are in the market for a new right-back.

They have struggled to find a consistent performer in that position in the last two seasons and manager Slaven Bilic has turned to emergency options, with with defensive midfielder Cheikhou Kouyate and right-sided attacker Michail Antonio often used in the role.

Sam Byram, 23, was bought from Leeds for £3.75million in January of last year but has struggled to gain Bilic’s trust and has made just 17 appearances in all competitions.

Arbeloa, who joined the Hammers on a free transfer last August after he had left Real Madrid, has been used even less frequently, accumulating just four appearances for the Londoners.

He has been out injured since December but was barely used when fit as he struggled to live up to his reputation as a reliable performer on the right side of defence.

Arbeloa made 238 appearances for Real and is also vastly experienced in the Premier League following 93 matches for Liverpool.

West Ham Way state that St Etienne’s Kevin Malcuit and Manchester City’s Bacary Sagna are among the top right-back targets of the club.

In other West Ham transfer news, an emerging star is set to be offloaded by Bilic in the summer.