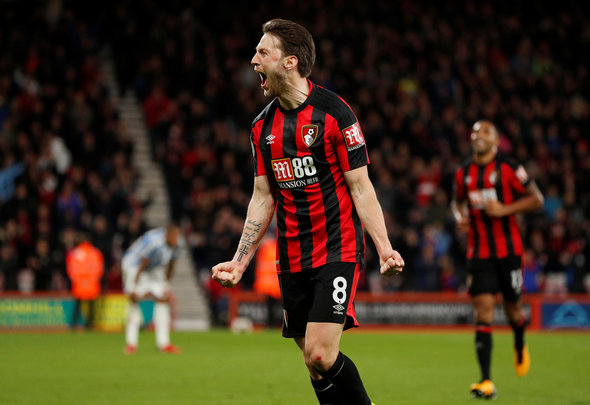 West Ham are set to table a third bid for Bournemouth midfielder Harry Arter in the forthcoming transfer window, according to a report.

The Daily Express claim that Hammers boss has identified the long-serving Cherries player, 28, as the ideal player to stiffen his midfield.

It is said that West Ham had two bids rejected for Arter in the January window, with the second amounting to £8million.

The Express report that Moyes is convinced that a deal can be done for the central midfielder, who has made 16 appearances for Eddie Howe’s side this season but last played on New Year’s Day.

Arter is a fine Premier League midfielder can fuses grit with guile. He has been a massive part of the Bournemouth success story, making 254 appearances for the club during their remarkable jump across the divisions before they became established as a Premier League club. West Ham skipper Mark Noble is well into his 30s and has a limited shelf life. Arter would be a sound replacement. The chances of Arter leaving the Cherries a few months ago seemed remote, especially as he penned a new contract that runs until 2021. But the Republic of Ireland international is not the first-team regular he once was, which gives West Ham hope that a deal can be done.

In other West Ham transfer news, the club are close to sealing two massive deals, an Insider has revealed.