Noel Whelan has admitted he is concerned Rodrigo will be rushed back to action from his injury layoff at Leeds United.

The former Leeds striker and lifelong fan at Elland Road, speaking exclusively to Football Insider, admitted the Whites had lacked a certain cutting edge from the number 10 role during the 29-year-old’s spell on the sidelines.

The Spain international took to his personal Instagram account last week to post a picture of him back on the training ground as he ramps up his recovery from a groin injury. 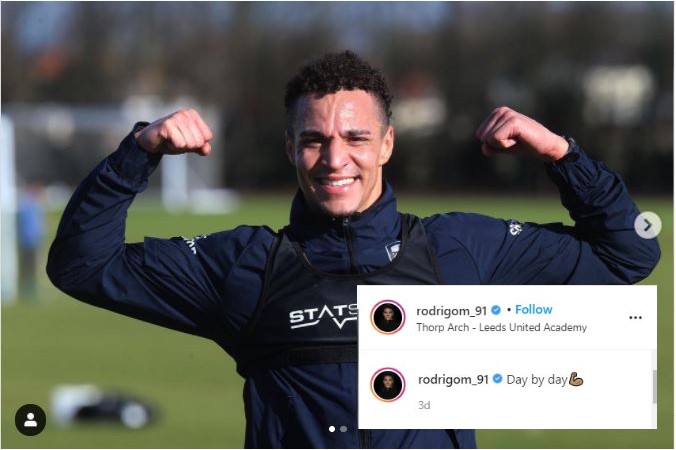 Rodrigo has now missed the Whites’ last four games, including Friday night’s 1-0 defeat to Wolves, and Marcelo Bielsa has refused to name a return date for the versatile forward.

Tyler Roberts lined up behind Patrick Bamford against Nuno Espirito Santo’s men, while Stuart Dallas has been pushed into a midfield role in the Spaniard’s absence.

Whelan admitted Rodrigo was turning out to be a big miss for Leeds but insisted the Whites could not afford to risk bringing him back too early.

Whelan told Football Insider assistant editor Russell Edge: “Well I think we like to see him back as quickly as possible really.

“He is a quality player and I think we’ve kind of missed that bit of quality in that number 10 role that he provides.

“Saying that, again, he’s a player that you can’t rush back. Injuries have hit him, he’s been in and out of the season and it’s been very stop and start for him.”

Rodrigo has played 20 times and scored three goals for Leeds since joining from Valencia last summer.

He had started nine consecutive league games prior to being forced in the 3-1 win over Leicester City last month.

In other news, Danny Mills has raised concerns over what Marcelo Bielsa is doing to Pascal Struijk at Leeds United.