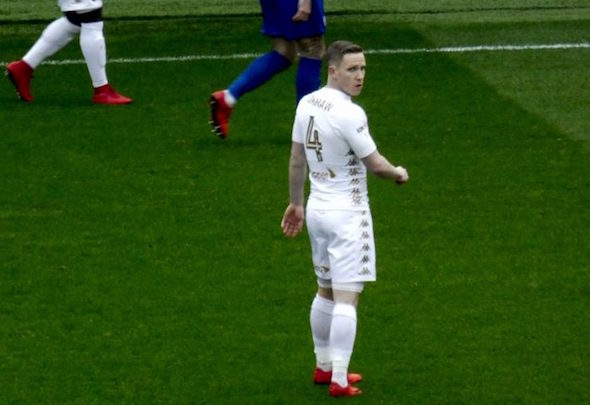 Noel Whelan has suggested Leeds United could cash in on midfielder Adam Forshaw this summer rather one of their prize assets – and promote Jamie Shackleton to a regular starting role.

The futures of a host of United stars are up in the air following the club’s Championship play-off failure that will condemn them to another season in the second tier.

Kalvin Phillips, Pontus Jansson, Jack Clarke and Kemar Roofe are the club’s most valuable assets and a number of them could be sold to raise cash as well as fund new arrivals.

Speaking exclusively to Football Insider, Whelan claimed it would be more prudent for Leeds to sell Forshaw than Phillips, insisting the £4million signing from Middlesbrough could raise a significant fee.

“We could get big money for Forshaw, I don’t see how his value has gone down,” Whelan explained. “We have not seen the best of him at Leeds and he is one worth considering to sell, definitely. “I think we also have the ideal ready-made replacement in Jamie Shackleton, who plays the central midfield role better than Forshaw. He has more energy and is better going forward and on the ball. He’s younger and better.

“For me, Shackleton for Forshaw all day long. I would get him starting next season, definitely.”

Forshaw, 28, made 19 league starts among 32 appearances for United in a season in which he suffered a serious knee injury.

Shackleton, 19, made an excellent impression when given his opportunity and played a major role in the two play-off semis after previously starting only three league games for the club.