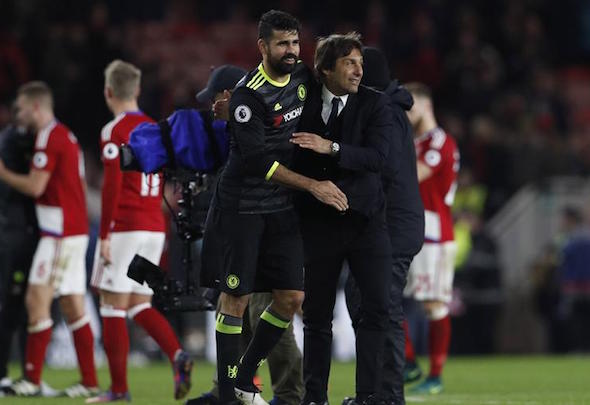 Chelsea proved on Saturday evening that they are the frontrunners for the Premier League title this season.

The Blues came from behind to secure three points against London rivals Tottenham and moved back to the top of the Premier League.

Christian Eriksen gave Spurs the lead in the 11th minute with a long-range effort as Chelsea’s six-game run without conceding was ended.

Antonio Conte’s side had won all six of those previous game and had been fairly untested, but proved against Spurs that they can respond, the hallmarks of champions.

Pedro curled in a fantastic shot just before half-time and wing-back Victor Moses scored the winning goal in the 51st minute at Stamford Bridge.

There goalscorers on Saturday prove that they are over reliant on Eden Hazard and Diego Costa for goals, with the Blues looking dangerous from all angles.

Chelsea have now won all seven league games since they switched to a 3-4-3 formation and are the in-form team in the division.

The West London club have enjoyed unbelievable success with a three-man defence and must now be regarded as favourites for the title.

There were suggestions that the club’s winning run has been helped by favourable fixtures, with victories over Hull, Leicester and Middlesbrough.

Chelsea have also beaten competitive sides in Southampton and Manchester United during this run, as well as dismantling Everton 5-0.

This remarkable form proves that Conte’s tactical switch is no fluke and they are a real threat to Liverpool and Manchester City.

Those two clubs sit just a point behind them in the table but are yet to quite hit the top form for a sustained period of time.

Chelsea travel to the Etihad to face Man City in their next game and a victory there would certainly lay down a huge marker of their title credentials.

In other Chelsea news, Pedro proved against Spurs that he is a nailed-on starter for the club.