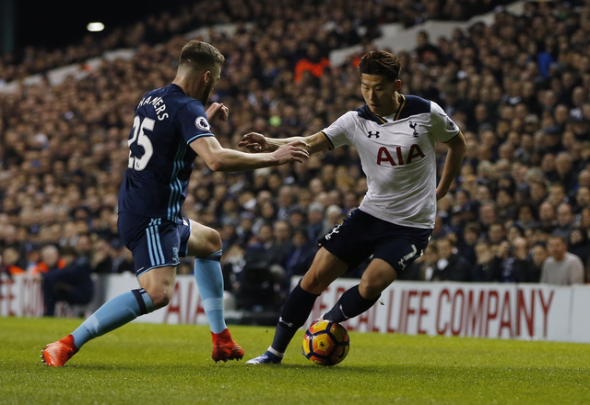 Tottenham attacker Heung-Min Son is proving to be the most under-rated player in the squad after another bright performance on Saturday.

The 24-year-old played a major role in the 1-0 victory as he was fouled inside the penalty area against Middlesbrough, with Harry Kane converting the winning goal from the spot.

Son may not be one of the standout names at White Hart Lane and has had to endure spells in and out of the team this season, but has certainly proved what a valuable member of Mauricio Pochettino’s squad he is.

The manager must cherish the former Bundesliga ace, given his capacity to influence matches and create and score goals.

He was used commonly at the beginning of the season and scored braces in victories over Stoke and Boro in September.

The South Korea international has proven he has an eye for goal this season, with 11 goals and six assists in 29 appearances across all competitions.

However, Son has been restricted to the substitute’s bench for large part of the campaign as Kane, Dele Alli and Christian Eriksen have been preferred as the attacking trio.

That has not stopped Son making bright contributions off the bench, none more so than when he scored as a second-half substitute to earn Spurs a 2-2 draw against Manchester City.

He has started the three games since and scored twice in the dramatic 4-3 win over Wycombe in the FA Cup.

Son’s role in the squad may be under appreciated by some fans, but the hard working attacker always gives 100 per cent and is a great asset to the team.

He is now set to get more opportunities to impress as Spurs’ Europa League campaign begins soon, while also proving how valuable he can be in the club’s league pursuit of the title.

In other Tottenham news, Pochettino should fast-track the club’s rising academy star.