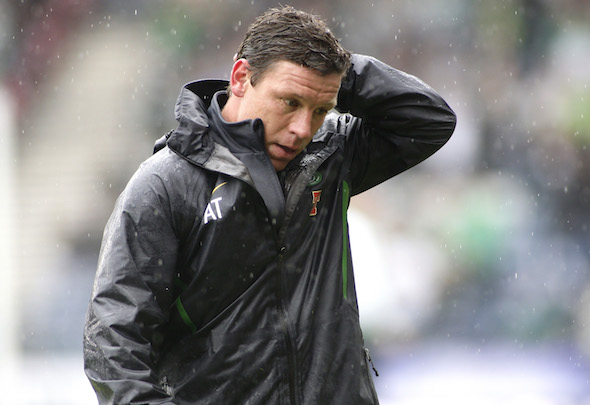 Alan Thompson has made a comparison between his career on the international stage with current Celtic star Scott Sinclair.

The 28-year-old has yet to receive a call-up for the England national team despite playing an integral part in helping the Hoops remain unbeaten in domestic competitions in the last 59 matches.

Sinclair has failed to make an appearance for the Three Lions throughout his entire footballing career despite impressing with his performances for Swansea City and Celtic.

The forward was one of the standout performers in Scotland last season, contributing with total of 25 goals and 11 assists in all competitions, playing an essential role in guiding Celtic to a remarkable treble.

Sinclair has continued to deliver the goods this season, scoring ten goals and six assists.

Speaking to the Scottish Sun, Thompson relates with Sinclair and believes that there are some similarities with his own international football experience.

“It’s a difficult situation for Scott,” he said.

“I know that because I was in a similar position at Celtic.

“I was playing well in the Champions League, and you start to think you might have a chance of a call-up.

“I did get the call, once, and it was a very proud moment for me. To play for England was an incredible experience.

“But I never got another opportunity — and there is no doubt it’s difficult to get an England call when you are at Celtic.”

Thompson was an important member of the first-team squad during his seven-year spell at Celtic Park, securing a total of four SPL titles.

The former Hoops man is confident that Southgate will give Sinclair the opportunity to shine on the international stage sooner rather than later.

“He won’t just dismiss Scott Sinclair, and hopefully he will get the call one day,” he added

“But Sinclair has to dig in and keep scoring goals, he is good enough to play for England.

“If Sinclair does well in the Champions League, then it will be difficult to overlook him.”

The Englishman will have the chance to impress when Celtic meet European giants Bayern Munich in the Champions League in midweek.