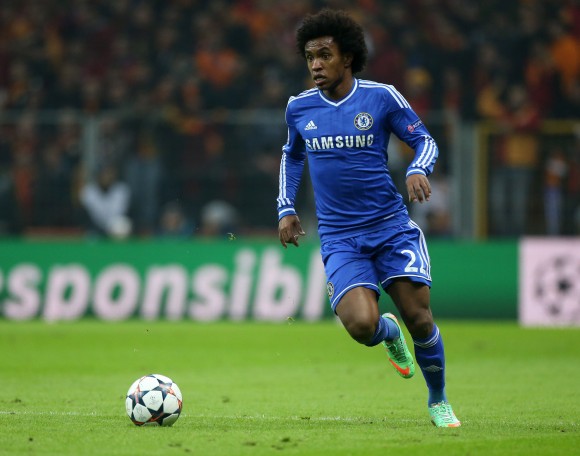 By Michael Cantillon
Willian is untouchable, Kurt Zouma is an unconvincing right-back and other things we learned from Dynamo Kiev 0 Chelsea 0.
Willian has emerged as Chelsea’s star man
For his set-piece deliveries alone, Willian is undroppable. His free-kicks from all angles and distances are first-class and are often proving undefendable. After 20 minutes he delivered a devastating cross from a free-kick out wide but Diego Costa went with his foot and not his head as the chance went begging. At the beginning of the second-half the Brazilian then came within a whisker of opening the scoring from 25 yards out, when his delicious free-kick bounced down off the cross-bar. The whip and trajectory he puts on the ball is a joy to watch and, after scoring six goals in his last seven games for Chelsea and Brazil, Willian must remain in the team.
Fabregas is more effective in No10 role
Fabregas looks so much more comfortable and threatening playing in front of Matic and Ramires in a three man midfield rather than as part of a central duo. When he has been picked to play alongside Matic recently, the Spanish maestro has waylaid his mojo. His lack of pace has been exposed and he has frequently taken unnecessary extra touches. Tonight he looked much more assured, keeping the ball neatly and looking to play it forward at every opportunity. He should also have had a penalty after just 16 minutes when he burst into the box and was up-ended by a combination of Serhiy Rybalka and Yevhen Khacheridi. Fabregas looked bright all evening, receiving and keeping the ball in key areas. He should be played in attacking midfield from now on.


Zouma at right-back is a risk
Though Andriy Yarmolenko was touted beforehand as Dynamo Kiev’s star man, Cesar Azpilicueta kept him relatively quiet down the right-hand side. Where Kiev did have some joy was down Chelsea’s right, with stand-in right-back Kurt Zouma looking very shaky. Kiev left-back Domagoj Vida, who is naturally a centre-half, ran riot down the left-hand side most of the match and Chelsea were lucky that he did not make more of the time and space he was afforded by the uncomfortable Zouma. A couple of edgy clearances and rash challenges also indicated that the young defender was jittery and vulnerable. This will be a concern for Jose Mourinho.
Chelsea have a better balance
Though they didn’t win the game, Chelsea had a much better balance to the team than in recent weeks. The whole shape of the team would have pleased Mourinho as Matic and Ramires had very strong games ably protecting Terry and Cahill behind them. Fabregas was bright in the top third of the pitch, whilst Eden Hazard looked hungry after his spell out of the team, hitting the post and always providing a dangerous option on the left-hand side. Willian worked hard and Azpilicueta has a superb game. For once, Asmir Begovic had very little to do. Chelsea should really have won the game tonight but Mourinho will be pleased with the shape and balance of the team he picked.

Chelsea still have work to do to reach knockout stage
With Porto beating Maccabi Tel Aviv 2-0 tonight to move to the top spot in Group G, Chelsea are left lagging behind in third place. As things stand, Mourinho’s team have four points, while Kiev have five and Porto seven. The visits of Chelsea’s two major group rivals to Stamford Bridge have now become must-win games if Chelsea are to achieve their principal ambition of topping the group.