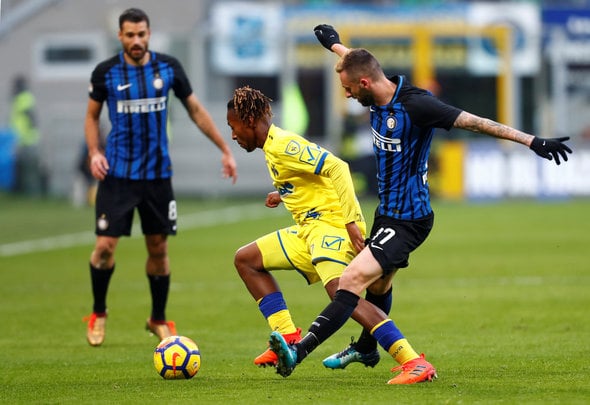 Wolves have a potential transfer battle with Swansea on the cards for January as the two sides have set their sights on Chievo midfielder Samuel Bastien, according to a reliable journalist.
Guardian Sport deputy news editor Ed Aarons claimed on his personal Twitter account on Thursday night that Wolves are in a race with the Premier League club for Bastien, 21, and a loan move is the most likely option.
It is understood that the loan deal could include an option to buy at the end of the season.

Wolves and Swansea interested in Chievo midfielder Samuel Bastien. Loan most likely with option to buy

Bastien was signed by Serie A side Chievo for £2.2million from Anderlecht in August 2016 but the central midfielder has since struggled to get regular first-team football.
This season, the Belgium playmaker has made just 11 appearances in the Italian top-flight, scoring one goal in the process which came in a 1-1 draw with Atalanta in September.
The Belgium Under-21 international has been in and out of the Chievo first-team this season and was axed to the bench in their most recent fixture against Benevento.
Football Insider verdict
Bastien does not look as though he would be a signing who could go straight into the Wolves first-team and start pulling up trees but there is certainly a weight of potential surrounding the Belgian youth international. He came through the ranks at the academies of both Standard Liege and Anderlecht, which is where a lot of Europe’s top talent has honed their skills. Chievo was a strange place to go for Bastien because they are not a solid Serie A side and are always expected to be battling relegation. A move to England would be a good option for him. A lot of Belgian players have done well in England and Wolves’ standing in the Championship could make them a more attractive move than to struggling Swansea.
In other Wolves news, the club are in the hunt for this enigmatic striker who was the subject of a £10million bid in the summer.
We’ve launched a << BREAKING NEWS FEED>> exclusively for your club. ‘Like Us’ on Facebook by clicking here if you want 24/7 updates on all Wolves breaking news.