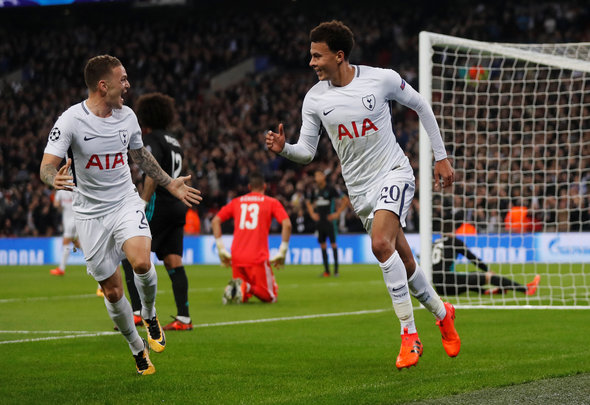 Real Madrid boss Zinedine Zidane has identified Tottenham midfielder Dele Alli as a replacement for Luka Modric, according to a report.

Spanish website Don Balon claims that Zidane has earmarked Alli as a potential replacement for the Croatian at the end of the season.

The 32-year-old midfielder’s form and possible fatigue have been called into question recently with Madrid already eight points behind Barcelona in the La Liga title race.

Meanwhile, after a slow start to the season, 21-year-old Alli has been in outstanding form for Spurs in the Premier League.

He also stole the show in the recent Champions League showdown between Spurs and Madrid at Wembley, where the England international scored twice in a sensational 3-1 win for Tottenham over the European champions.

According to Don Balon, Real boss Zidane was ‘amazed’ with Alli’s performance in the European clash and thinks he could be a huge success in Spain if he was to make the switch to the Bernabeu.

Alli would be following in the footsteps Real Madrid star Gareth Bale, who left Spurs to join Los Blancos for a world record fee in 2013.

After Tottenham beat Real Madrid 3-1 in the Champions League, it’s perhaps not surprising that more salacious elements of the Spanish press are linking Real to all the major Tottenham players. First Harry Kane and now Dele Alli. As ever, the players seem to be happy under Pochettino at the moment but his Tottenham revolution will have to start winning trophies and paying more money if it wants to keep hold of all the stars. This might be more smoke and mirrors but speculation will continue throughout the season and intensify towards the end of the season. If the Euro giants do come calling, will every single Tottenham player be able to resist?

In other Tottenham news, this Champions League winner could be set for a Premier League return as part of a swap deal for Spurs striker Harry Kane.