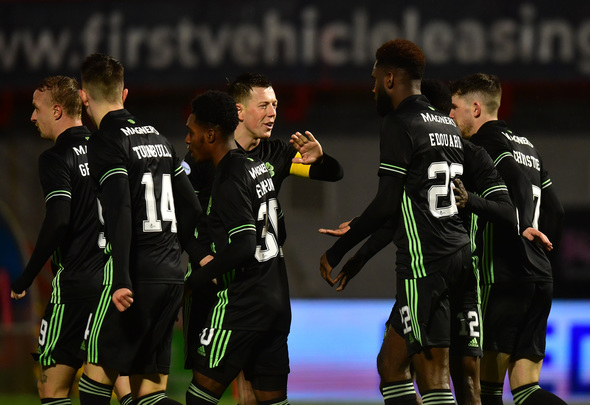 Noel Whelan has heaped praise on Leigh Griffiths for “dragging Celtic out of a difficult period” with his performances.

The former Aberdeen and Leeds United forward, speaking exclusively to Football Insider, claimed the 30-year-old is “grabbing the bull by the horns” after a difficult period for Neil Lennon’s side which yielded just two wins in 12.

Neil Lennon has questioned the striker’s fitness on numerous occasions this season but has been won over by the long-serving Hoops man.

Whelan said it will be be difficult for Lennon to leave Griffiths out against Rangers this weekend on current form.

“Griffiths is the common denominator,” he told Football Insider.

“Wow, what a great player, he is hard to leave out because of the quality he brings. He possesses that natural goalscoring ability.

“He is producing the goods just when Neil Lennon needs him. The club needed a boost and he has provided. He is the one that is taking the reins, especially offensively.

“It is great to see him back because a confident Leigh Griffiths is a thorn in any side. You know he will score goals at that level if you give him the service. Nine times out of ten he will put the ball in the back of the net.

“He is really grabbing the bull by the horns and dragging Celtic out of what has been a difficult period. He has given them a new lease of life.

“The pressure is easing on Neil Lennon because of it. They may have turned a corner.”