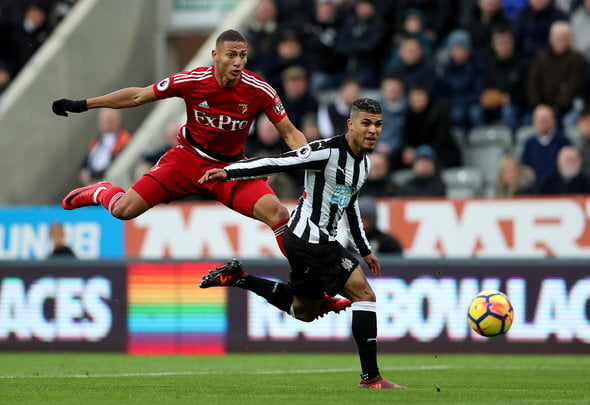 Tottenham Hotspur target Watford striker Richarlison has refused to rule out a move away from Vicarage Road, according to a report.
The Evening Standard has revealed that the Brazilian attacker is wanted by Spurs, while Chelsea and Arsenal are also believed to be interested.
Richarlison, 20, only moved to the Hornets last summer and immediately impressed.
Five goals in 30 outings has caught the attention of some of the Premier League’s bigger sides but after only joining Watford for £11.5m in 2017, the player has a five-year contract with the side and is unlikely to come cheap.
And amidst speculation of a switch elsewhere, the Brazilian said that any talk of a move away from Vicarage Road was for his representatives to deal with not him.
Speaking in the Evening Standard, the player stated: “In the future you never know but I leave all things like that up to my agents.”
Football Insider verdict:
Spurs have been linked with Richarlison for some time now and the player certainly fits in with Mauricio Pochettino’s style of play. Not only that but the attacker could also provide some backup for Harry Kane. Son Heung-Min stepped in earlier this season when the England striker was sidelined for a few games due to injury and did well but there was a feeling that if Kane had a more lengthy spell out, it could hamper the club’s ambitions. Richarlison has already shown that he can score in the top-flight and in a creative set-up like Tottenham’s he is sure to get plenty of chances to show what he can do.
In other Tottenham news, dropped by Fox for truck racing – Spurs fans react hilariously as Arsenal get set for Europa Thursday.