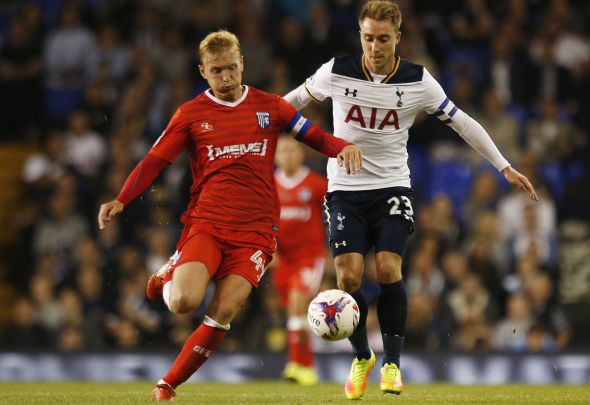 Nottingham Forest are keeping tabs on Gillingham midfielder Josh Wright as he continues to thrive in attacking midfield following a positional change, according to a report.

The Daily Mail claim Mark Warburton’s Forest are interested in bringing the Gills captain to the City Ground, after striking 13 goals throughout the 2016-17 season.

Wright, 27, has benefited after being pushed forward into an attacking midfield role, after previously scoring just six career goals before the start of the campaign.

The versatile star also caught the headlines this season after joining an elite group of players to score three penalties in one match, after he scored a hat-trick in the 3-2 win over Scunthorpe.

The three spot-kicks, which saw the Gills go from 2-0 down to claim all three points, sees Wright join an elite list alongside Brazilian World Cup winner Ronaldo.

Forest are currently dwindling above the Championship drop zone and if Warburton can keep the two-time European champions up, he will need inspiration from midfield next season.

Wright has been reportedly eyed to provide that, as he continues to shine in the attacking midfield role at Priestfield Stadium in a side that are also fighting against relegation.

Wright has been in fantastic form all season for the Gills and would be a top addition to Forest’s side, should former Rangers boss Warburton opt to move for the skipper. Forest are yet to properly replace goalscoring midfielder and ex-captain Henri Lansbury after he jumped ship to join Steve Bruce’s Aston Villa, while on-loan midfielder Pajtim Kasami has struggled to provide the necessary goals from midfield. Bringing Wright to Forest would give the side Football League experience and place less reliance on the likes of Britt Assombalonga to find the back of the net. With 119 Championship appearances to his name, Wright could be the key to a play-off challenge next term.

In other Nottingham Forest transfer news, Everton are looking to swoop for this Forest teen.