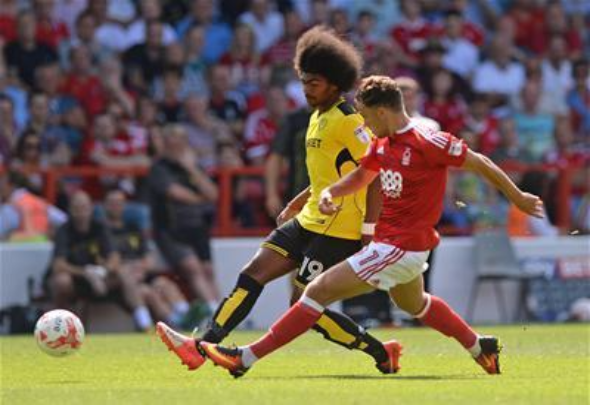 Nottingham Forest caretaker manager Gary Brazil should recall Matty Cash to his starting XI as one of five changes to face Fulham in the Championship on Tuesday.

Brazil will be forced to make a minimum of two changes to his side due to injuries and suspension, but could be tempted to make more following the 5-1 defeat to Norwich on Saturday.

With Henderson sidelined, Brazil has little options at his disposal in the goalkeeping department, and should hand Smith a place in his starting XI.

The youngster replaced Henderson off the bench against Norwich and made a decent account of himself, and may well have earned himself another first-team appearance.

There is a slim possibility that Vladimir Stojkovic could return from injury in time to face Fulham, but he is still to be assessed. Nottingham Forest’s best option though, remains Smith.

Lichaj’s suspension sees Brazil seeking to make a change at right-back, and he should look no further than Pereira.

The 20-year-old’s versatility will be of great use to the Nottingham Forest chief, with his side currently short of options.

Meanwhile, if passed fit in his recovery from a minor knock, Brazil must reinstate centre-back Mancienne to his back-four. The former Chelsea man brings about a stronger, more solid base to Nottingham Forest’s side, and he was a big miss against Fulham – evidenced in the 5-1 scoreline.

Nottingham Forest should also recall gifted young winger Cash to the side at the expense of January addition Tshibola, meaning Ben Osborn drops into the centre of midfield.

The 19-year-old was axed from the side against Norwich, but his potential to influence in the game in the final third could give Forest a much-needed advantage over Fulham.

Joao Teixeira and Gboly Ariyibi could be also be handy additions to the starting line-up, with both players yet to make their debuts for the club.

Lastly, Brazil should make a big call and drop hitman Assombalonga to the bench, allowing McCormack and Clough to lay the foundations of a crucial future partnership in attack.

Assombalonga is one of Forest’s main goal threats, scoring nine goals from 19 appearances this season; but both Clough and McCormack have the potential to do real damage for Forest in the coming months, and should be given the opportunity to make an impact together against Fulham.

A win for Nottingham Forest could send them up to 13th, though they will be going up against a Fulham side that are way-ahead in ninth-place, and 10 points better-off.

Defeat, on the other hand, could see Forest drop down to 19th.