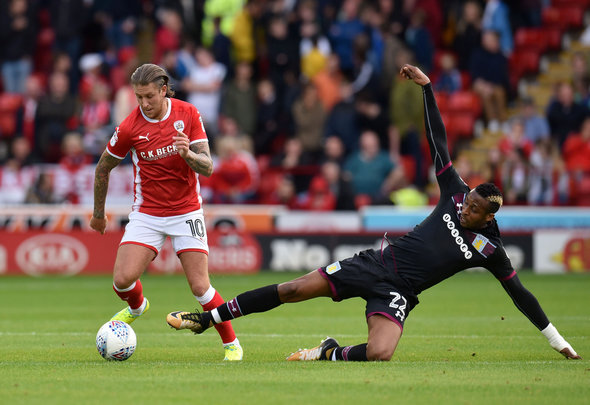 Aston Villa centre-forward Jonathan Kodjia has been named in the WhoScored Championship Team of the Week after his performance against Nottingham Forest on Saturday.

Steve Bruce’s side secured a 2-1 victory over Forest at the weekend with goals courtesy of Albert Adomah and Conor Hourihane.

However, despite their goal scoring success the pair were missed out of the Team of the Week while their team mate, Kodjia was the only Villa player name in the team and given a 7.9 rating out of 10.

Two Burton Albion players, goalkeeper Stephen Bywater and defender Jake Buxton, were also named in the team of the week ahead of their clash with Bruce’s side on Tuesday.

Leon Clarke's only 2 league goals this season came in Saturday's Steel City Derby. He leads the way in our Championship team of the week pic.twitter.com/BZoQb9wwp3

The centre-forward provided an assist on Saturday after he set-up Adomah’s opening goal in the first-half but was sidelined in the 79th minute when fellow goalscorer Scott Hogan was brought on to the pitch.

Kodjia finally returned to the first-team at the beginning of September after being sidelined in April with a broken ankle which resulted in the Ivory Coast international missing a total of 10 Villa games.

Since his return, the 27-year-old has featured in the last three fixtures in the Championship and started against both Barnsley and Nottingham Forest.