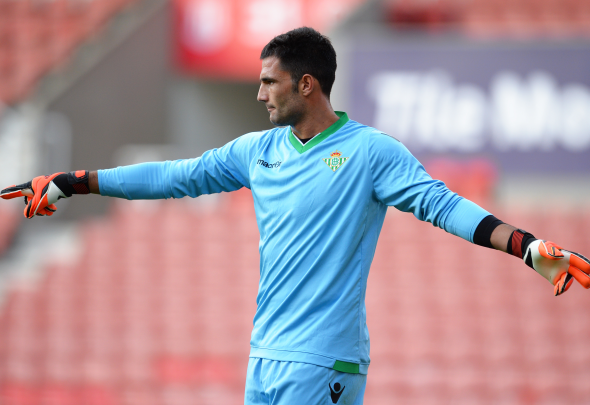 Liverpool have already signed Loris Karius from Mainz and the German is expectedly to challenge Simon Mignolet strongly for the No1 spot at Anfield..

However, the Daily Star claim that Mignolet’s form throughout the season is a cause for concern to manager Jurgen Klopp.

However, the 29-year-old has ruled out any kind of move to England to the delight of Gus Poyet’s new side.

He said in an interview with AS: “Liverpool? I’ve only recently signed a new contract and I did that because I feel important here with Betis, therefore it’s something I’m not really thinking about.”

The former Real Madrid stopper has been in fine form this season for Betis, notching up a total of 13 clean sheets.

Adan, who signed for Betis from Italian side Cagliari, didn’t rule out the possibility of moving to the Premier League in the future.

He added to AS: “The Premier League has always been a league I liked and maybe in the future [I will play there], but right now I’m not looking at the future or in the long-term.”

Adan has represented Spain at every youth level but has been unable to win a senior cap with the likes of Iker Casillas and David De Gea ahead of him.

He joined Real Madrid when he was just 10 and spent 16 years at the Galacticos before moving to Cagliari.

In other Liverpool news, Jordan Ibe’s future has been thrown into fresh doubt after this appeared on his Instagram account.