Gabby Agbonlahor has admitted he was surprised Keinan Davis was not introduced from the Aston Villa bench against Liverpool.

Speaking exclusively to Football Insider, the ex-Villa captain insisted the game was “crying out” for the 23-year-old who played a key role in Villa’s previous game against Fulham.

Davis played the final 23 minutes – his longest appearance since the opening day – and grabbed his first Premier League assist as he helped inspire Villa’s comeback win over the Cottagers. 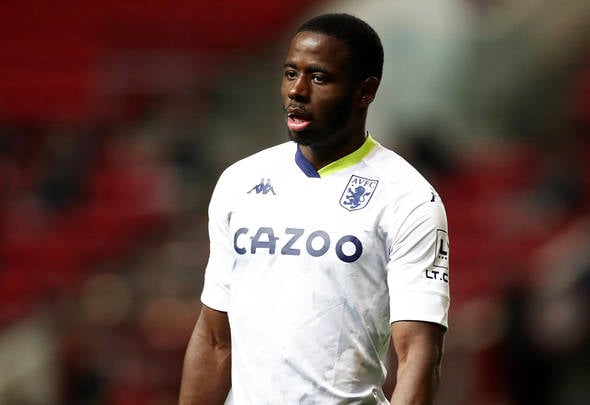 However, he had to watch from the bench at Anfield and Agbonlahor has questioned why he was not introduced when Trezeguet was forced off with an injury.

He told Football Insider correspondent Connor Whitley: “I really thought Villa might try something different and go for two strikers because [Ozan] Kabak and [Nat] Phillips were there to be got at. They didn’t really get tested all game.

“I think it would have been a good decision to start Keinan Davis but then you have to think, is he ready to start? Is he better coming off the bench?

“To not see him come on at all… I thought maybe he would come on especially when Trezeguet got injured. Watkins on the left and Keinan up front.

“He [Smith] didn’t do it so he must have his reasons but I’m sure Keinan will play a big part for the rest of the season.

“It’s definitely frustrating for him. You want to be playing the big games at the big stadiums.

“Especially the way the game was going, it was crying out for someone like him.

“He’s the only one from the bench who could change the game and it’s a shame he didn’t come on.

“Hopefully the next game against Manchester City, you’re going to need players like Keinan running in behind and causing an upset to the defence.”

In other news, Aston Villa are braced for a “monster” offer for a 28-year-old from Premier League rival.