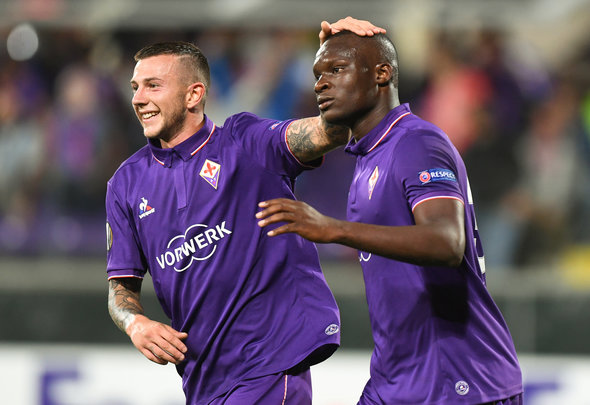 West Ham are in the hunt to sign Fiorentina forward Khouma Babacar as David Moyes may find himself losing three first-team strikers this month, according to a report.
The Sun claims that Babacar’s agent is working on getting him a switch to the Premier League during the current transfer window, but it is said that David Moyes would only be interested in a loan deal while Fiorentina are looking to pocket £15million.
The report adds that the 24-year-old Senegal international is available to leave the Serie A side, which is what has alerted Moyes to his situation with the possible exit of three players on the cards.
Andy Carroll, Javier Hernandez and Diafra Sakho may all be leaving the London Stadium with interest understood to be registered in the attacking trio.
Chelsea are said to be planning a shock loan move for Carroll while Sakho is wanted by Crystal Palace, Newcastle, Swansea and Cardiff.
Hernandez could leave the Hammers if the right offer comes in, which would leave Moyes well short of strikers ahead of the final half of the Premier League season.
Babacar has made 17 appearances in all competitions for Fiorentina this term, scoring five goals despite failing to start a single game in Serie A.
Football Insider verdict
West Ham may be able to make a decent amount of money in selling Carroll, Hernandez and Sakho. Not only would they demand decent fees but they are also likely to be on good wages at the London Stadium. However there is absolutely no chance that Babacar is better than any of them. The Senegalese forward is approaching the peak of his career and is still yet to find a consistent spot in Fiorentina’s first-team, and therefore has struggled to score goals. His record off the bench is decent, but that is a completely different thing when Moyes will no doubt want a starting No 9 who can spearhead his attack week in and week out. There has to be better options out there for the Irons.
In other West Ham news, the Hammers are in the hunt to sign this £120,000-a-week colossus who is eager to quit his Champions League club.
We’ve launched a << BREAKING NEWS FEED>> exclusively for your club. ‘Like Us’ on Facebook by clicking here if you want 24/7 updates on all West Ham breaking news.