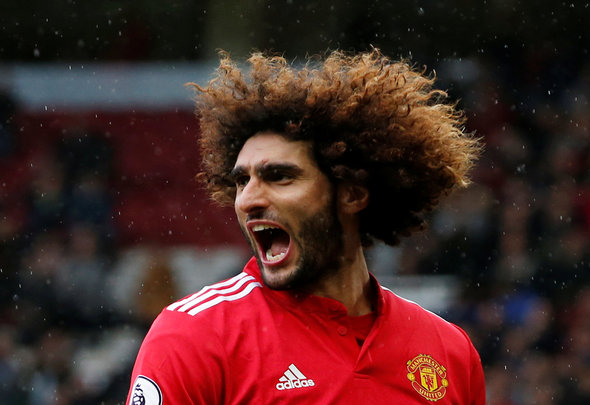 West Ham are in the hunt to sign Manchester United enforcer Marouane Fellaini, according to a report.
The Daily Star reports that David Moyes is looking to sign up Fellaini, 30, for the third time in his career after previously taking him to both Everton and Man United.
It is understood that the midfielder is eager to quit Old Trafford to find a new challenge when his contract runs out at the end of the season.
The report adds that Moyes and West Ham are keeping close tabs on the Belgium international’s contract situation at the Champions League last-16 club.
The Telegraph has previously reported that Fellaini is earning £120,000-a-week at Man United, but is playing hardball in contract negotiations as he would like the Red Devils to offer him £170,000-a-week.
Jose Mourinho has admitted he is worried that the midfield colossus could leave Old Trafford with his contract situation up in the air.
The 6ft 3in midfielder has made 13 appearances across all competitions this season, scoring four goals.
Football Insider verdict
Fellaini is the kind of player that you want on your team and not to be playing against. The Belgium international has come in for a lot of criticism throughout his time at Old Trafford and it appears that could be taking it’s toll as he looks for a new club. West Ham would definitely be a good fit for Fellaini. He has worked with Moyes before and the London club are in desperate need of a physical powerhouse in their midfield that is seriously lacking bite at the moment. The huge problem is his wage demands. The Hammers probably cannot afford that much unless they ship out one or two first-team players on big money.
In other West Ham news, this Champions League defender is on the verge of a £20million switch after being wanted by the Hammers.
We’ve launched a << BREAKING NEWS FEED>> exclusively for your club. ‘Like Us’ on Facebook by clicking here if you want 24/7 updates on all West Ham breaking news.