Aston Villa youngster Carney Chukwuemeka is destined for stardom – and he could even make his first-team debut this season.

That is according to former Villa and Scotland star Alan Hutton who, speaking exclusively to Football Insider, insisted the 17-year-old attacking midfielder is one of the “next big things” in English football.

The Times report the likes of Manchester City, Manchester United and Liverpool have all been tracking the starlet’s development ahead of a potential move in the future. 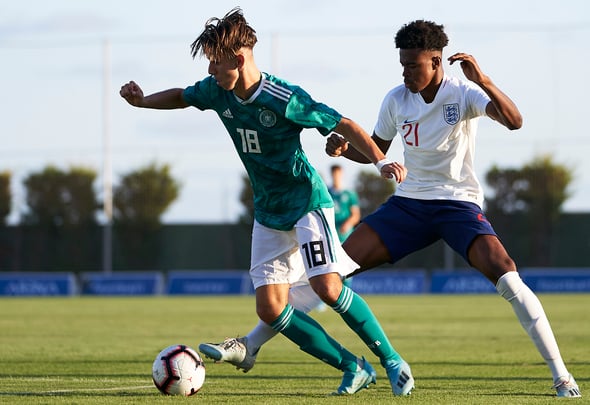 The teenager is said to have been training with the first-team squad since last summer, a sign of his prodigious talent.

However, his promotion in training also meant he was forced to isolate amid a Covid-19 outbreak at the club and forced to watch from home as a team made up of his under-18 and under-23 teammates took on Liverpool.

Hutton has admitted it was an unfortunate twist of fate for Chukwuemeka but insisted the youngster is so good, he could make his debut in the Premier League this term.

“I’ll tell you one thing, he is a top player, a top, top player – he’s got everything to make it at a high level,” Hutton told Football Insider assistant editor Russell Edge.

“It doesn’t surprise me all these teams are flocking about him, he’s only 17-years-of-age attacking midfielder, he’s got all the tricks in the book, he’s calm on the ball, he can see a pass, he’s literally got everything.

“It’s a shame – this sounds daft – he was training with the first-team so he had to miss that Liverpool game because he’s one that would have stood out, 100 per cent.

“So for me, he’s one of the next big things coming through. I’d love to see him stay at Villa because in the next season or two, this season maybe, he’s the kind of guy that he’s got that confidence, nothing phases him, and he could definitely break into the first-team.

“I hope that they can hold on to him – it’ll be difficult but I really hope they can do it.”

In other news, Alan Hutton has revealed the Aston Villa squad are all saying the same thing about Morgan Sanson in training.