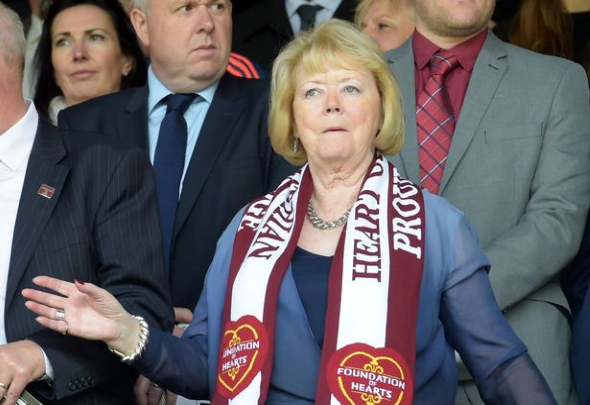 Hearts chairwoman Ann Budge has insisted there’s “no reason” to think Rangers are being dealt with any differently as part of the Financial Fair Play process after being quizzed by fans at a Q&A session.

After reporting a loss in each year of the current reporting period, there have been suggestions that the Ibrox giants would fail UEFA’s FFP checks and may not be eligible for a licence to compete in Europe next season.

Budge was asked if the Tynecastle side would seek reassurance from the Scottish FA that the Light Blues satisfy the FFP regulations ahead of next season having “publicly reported substantial losses in each of its five years existence” and require several million pounds of funding from directors over the next few years.

The Hearts chair admitted there was “no reason” to believe the Gers were being treated differently to any other club.

“All I can say is that at Hearts, we have to jump through a lot of hoops to ensure we comply with FFP rules,” Budge said, as quoted by the Daily Record.

“We must assume that UEFA does the same with all other clubs and it’s UEFA who decide if a team can play in Europe or not. It’s not a question of whether a club is in debt. It’s a case of, is that club in a position to pay the debt back.

“We have to complete enormous amounts of paperwork to UEFA, the SFA, the SPFL. When we took over in 2014, we had to attend a lot of meetings to prove we could run a financially viable football club. There is no reason to think Rangers are being treated any differently from any other team in that respect.”

If clubs fail to meet the FFP requirements punishments can range from a fine, squad restrictions for European games or refusal to issue a UEFA licence to allow clubs to compete in the Champions League or Europa League.

With UEFA punishing the likes of Manchester City and Paris Saint-Germain for breaching FFP in recent years the idea that European football’s governing body will bend over backwards to help Rangers is a particularly ridiculous idea. While a refusal to issue a licence to the Gers is highly unlikely, the Light Blues could have to deal with a restriction on how many players they can register if they do fail to meet the FFP requirements. One way or another though, Rangers will almost certainly be playing in Europe next season.