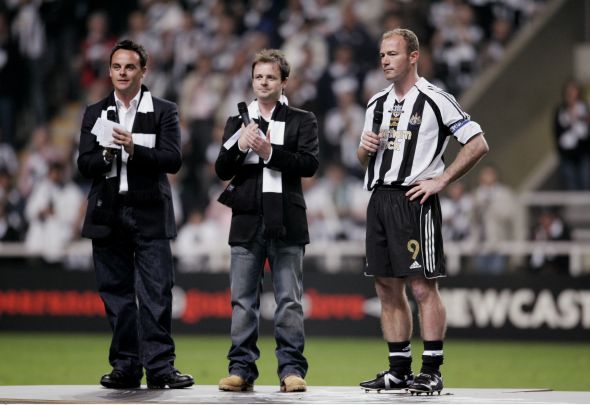 Anthony McPartlin and Declan Donnelly have thanked Newcastle manager Rafa Benitez for his work as the Toon secured promotion back to the Premier League against Preston.

The Magpies earned an instant return to England’s top flight with a 4-1 win over Preston at St. James’ Park on Monday night, as they join Brighton in the automatic promotion slots.

McPartlin and Donnelly, who form the famous television duo Ant and Dec, watched from the sidelines as the presenters’ beloved Toon returned to the Premier League.

Posting on their personal Twitter account, Dec said “thank you” to former Real Madrid manager Benitez for getting their side back into the big time after last season’s relegation.

However, Christian Atsu restored the lead before Matt Ritchie and Perez scored to earn a comfortable 4-1 victory against Simon Grayson 10-man side.

The Magpies now sit in second position with two games to go, four points behind Chris Hughton’s Brighton who need just one win to be confirmed as champions.

Benitez will be hoping his side can claw in the Seagulls this weekend, as they travel to Cardiff on Friday night in an attempt to reduce Brighton’s lead to just a point.

All eyes will turn to the Amex on Saturday night, as Brighton play host to Bristol City in front of the television cameras.

In other Newcastle news, former Premier League midfielder Don Hutchison has urged the Toon to do these two things after they secured promotion.