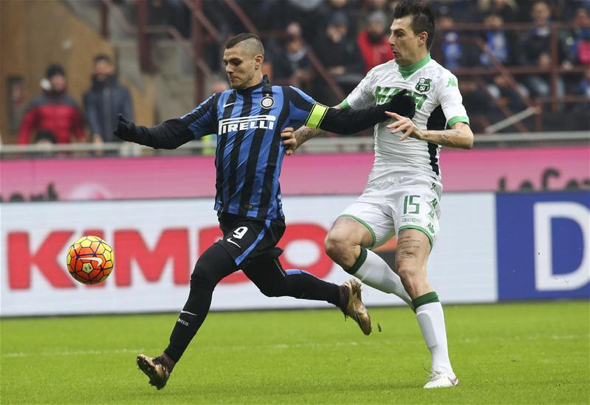 One of Arsenal’s major striker targets, Inter Milan’s Mauro Icardi, is ready to sign a new contract with the Italian giants, according to a report.

Italian website calciomercato.com have reported that Inter’s captain is ready to commit his future to the club.

It was reported that Inter have prepared a new four-year deal for the 23-year-old Argentine striker, worth £4.2m a year, plus a share of his image rights.

Icardi was named on the bench for Saturday’s game against Bayern Munich, but came on in the 72nd minute and scored Milan’s only goal in a 4-1 loss to the Germans. Icardi slotted home in the 90th minute.

Icardi has been linked to a number of big clubs, including Arsenal, who are desperate to bolster their front line before the start of the 2016/17 Premier League campaign.

The Daily Star claimed that Arsenal could land Icardi if they fail in their bid to sign Lyon’s Alexandre Lacazette. They have had a £29.3million offer rejected for the French forward but could go back in with an improved offer.

Icardi was made captain of Inter Milan under manager Roberto Mancini last season but failed to help Inter return to the top of Serie A.

The former Sampdoria striker bagged 16 goals and four assists in Serie A last season, but was left out out of the highly competitive Argentina squad for this summer’s Copa America.

In other Arsenal transfer news The Gunners have begun talks to sign Torino right-back Bruno Peres with a view to tabling a bid.